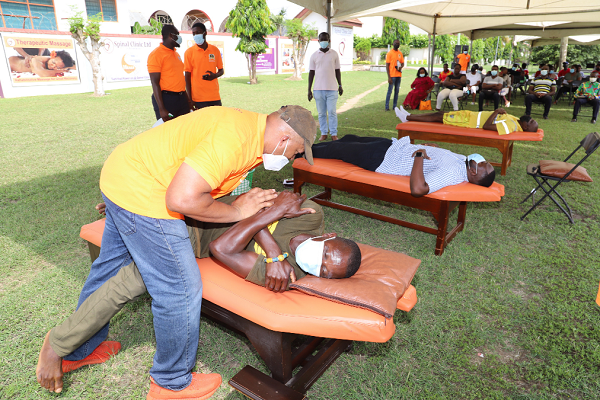 More than 100 residents at Lashibi in the Greater Accra Region have received free spine adjustments as part of activities to mark World Spine Day.

The event, which was organised by Spinal Clinic Limited, was on the theme, “Back to Back”.

It sought to raise awareness of spinal health and spine disorders among individuals, communities, professionals.

The beneficiaries, most of whom were young men, women and children, were drawn from Tema Community 19, 20, the Sakumono Estate and other adjoining areas within the Tema West municipality.

Addressing the beneficiaries before the adjustment exercise, the Chief Executive Officer of Spinal Clinic Limited, Dr Bryan Cox, said the event was to educate the public about the importance of the spine and also to give back to the community where it operates.

He said most of the spine challenges in the country were due to the traditional and cultural way of carrying out certain activities, as well as the postures most people adopted in their line of work and at home.

According to him, people must learn to sit, sleep and pick up things properly from the floor and avoid sitting for long hours to prevent themselves from developing spine problems.

He said a lot of Ghanaians were unknowingly injuring their spines daily by such activities as sitting slouched over the computers, books and sleeping on their stomach at night, adding that many were also unaware of the importance of the spine.

“We must sit like queens and kings and also make a lot of lifestyle changes by eating healthy foods, stretching, exercising daily and having enough rest to help live a more fulfilling life,” he said.

Dr Cox, therefore, said that it was very important that everyone (young and old) had their spine checked because, “sometimes there is a problem but you will not or may not necessarily have pain or any symptoms”.

He reiterated that both children and adults needed to have their spines checked by a qualified chiropractor specialised in the treatment of subluxation, a misalignment in the spine.

Dr Cox, however, cautioned the general public to beware of quacks parading themselves as chiropractors.

The Head of Department, Ghana Maritime University, Mr Stephen O.K.Yeboah, said he had been receiving chiropractic treatment for three years and unlike other healthcare practices, chiropractic care did not involve medications or surgery.

He indicated that due to the nature of his work, he developed severe body pains, headaches and weakness.

“I had to be driven around in my car but after receiving health care from the Spinal Clinic, I can now walk and drive on my own,” he said.