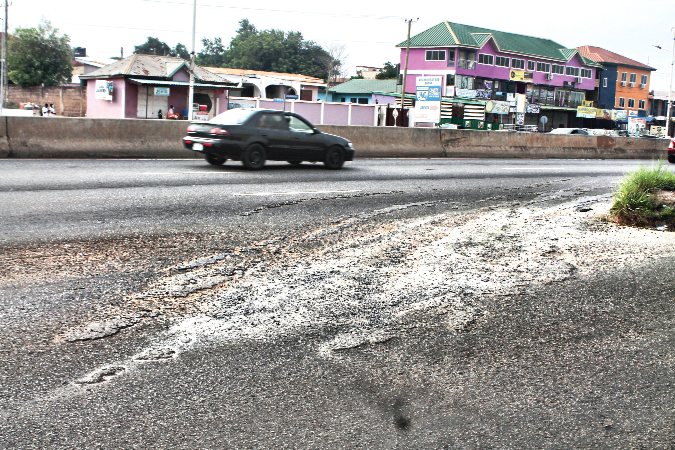 Concrete spills by mixer trucks are destroying asphalt roads, endangering the lives of motorists and have become a nuisance in Accra.

The spills usually occur when concrete is being transported to construction sites and when residual concrete is washed from a mixer truck onto road surfaces after delivery.

The spills harden fast, creating lumps that leave road surfaces rough and endanger the health and safety of road users.

Hardened lumps from spilled concrete are found on many roads in Accra, especially roads around the Tetteh Quarshie Interchange, a section of the Graphic Road, around the University of Professional Studies, Accra (UPSA) and some roads in Cantonments, Labone, East Legon and Adentan between Assemblies bus stop and Ritz junction, as well as on the GIMPA road.

Aside from degrading the roads, the hardened lumps also pose risks to motorcyclists as they can cause their bikes to skid off the roads and result in crashes.

The law states, among others, that: “A person shall not deposit construction material or equipment on the road in a manner that is likely to impede traffic, cause danger, nuisance or injury to a person or damage to property”.

In spite of it being an offence, the situation seems to be worsening by the day with the increase in development and construction activities in the city.

A source familiar with activities in the construction industry who does not want to be named, told the Daily Graphic that the concrete mixing companies were making profit at the expense of the country’s road infrastructure.

The source said there was a boom in the business of concrete producing companies as many construction firms were opting to buy mixed concrete for their works rather than mixing the concrete on site, as it used to be.

‘’People are gradually shunning mixing concrete on site and now prefer to buy them already-made and bringing them to site. This practice is now popular because it is a win-win situation for both the concrete producers and the contractors,” the source said.

While it helped the construction firms to save on labour, renting of concrete mixers and its attendant transportation issues as well as speed in delivery also helped the concrete producing companies make super profits.

During the many weeks of monitoring by a Daily Graphic team in Accra, the team chanced upon a mixer truck belonging to one of the concrete producing companies, Betonsa Ghana Limited, which was in the act of spilling concrete on the road at Shiashie near the Accra Mall.

The team saw that the truck had exceeded its capacity and as a result kept spilling some of the concrete on the road.

When confronted with pictorial evidence, the General Manager of Betonsa of Ghana Limited, Mr Zafer Elbatir, said it had come to his attention that some drivers defied the strict orders and sometimes engaged in activities that were not endorsed by the company.

“Some of these things are done on our blind side because we have to put in place measures to avoid such things from happening. Now we have a surveillance team that follows our trucks to ensure that the drivers do not spill anything on the road and in case that happens, unfortunately, we can clean it up before it dries up,” he said.

In a separate interview, the General Manager of Empire Concrete Limited, who gave his name only as Mr Vickness, also blamed drivers for the "periodic" spillage when transporting the concrete.

He said Empire had installed Global Positioning System (GPS) monitors in all of their mixer trucks to monitor the activities of drivers of the company.

"Now the GPS monitors we have installed will help us track them to know when and where they stop, and what they do. We are also giving them training to drive carefully," Mr Vickness said.

A management member of Jelcem Ghana Ltd, who pleaded anonymity, also told the Daily Graphic that the drivers were the main cause of such spillage.

Reacting to the situation, the Minister of Roads and Highways, Mr Kwasi Amoako-Attah, told the Daily Graphic that the ministry had begun processes to control the situation.

He said the ministry had already compiled a list of companies in the industry and would meet with the leadership for a dialogue on how to end the occurrences.

“Our attention has been drawn to these activities and we acknowledge that they are destroying the roads. Therefore, the ministry is also taking a number of measures to totally end such practices,” Mr Amoako-Attah said.

The minister noted that the spillage of concrete on roads, aside from being an affront to the law, was unacceptable as it degraded the road infrastructure.