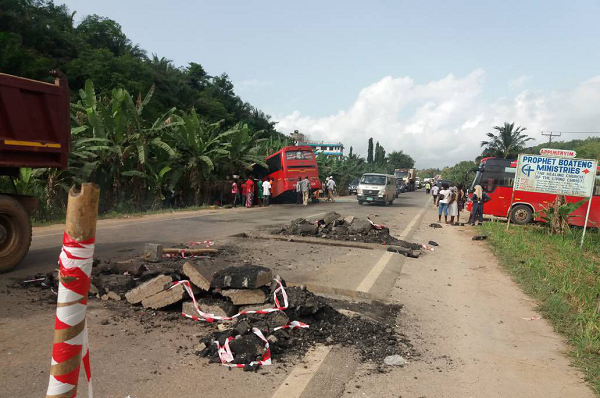 Excavated portions of the road where caused the accident occurred.

An uncompleted speed hump on the Takoradi-Cape Coast-Accra Highway Wedenesday dawn led to a collision between two vehicles which claimed three lives and left 50 others in critical conditions.

The injured are receiving treatment in various hospitals in Cape Coast, Shama and Sekondi/Takoradi.

According to the Regional Commander of the Motor Traffic and Transport Department (MTTD) of the Ghana Police Service, Chief Superintendent Mr Richard Appiah, an Elubo-bound Yutong bus with registration number Freedom 1-15, carrying 53 passengers from Aflao, collided with a tipper truck with registration number GE 3350 - 14 at about 4:15 a.m. on Wednesday.

The MTTD commander said the tipper truck was travelling towards Beposo in the Shama District.

Mr Appiah said upon reaching Assorko-Essaman, construction work on a speed hump in the lane of the Yutong bus was going on.

The police noted that the contractor, after the day’s work last Tuesday, had dug up the asphalt on the lane of traffic from Cape Coast without adequate reflective warning signs.

Unfortunately, Chief Superintendent Appiah said, the bus and the tipper truck arrived at the construction spot almost at the same time.

He added that though the drivers were not first-time users of the road, they were not aware of the construction works  which commenced a day earlier.

Both drivers, he said, upon seeing the danger, attempted to save the situation but their efforts yielded no fruits, hence the collision.

The bus, registered under the nameplate ‘Freedom 1’ with an inscription ‘Parliament’ on the haul, and the truck broadsided each other with the bus landing in a ditch.

Three people were confirmed dead on the spot, while others were rushed to the St Benedict Hospital at Shama, the Central Regional Hospital (Interberton) in Cape Coast and the Effia-Nkwanta Hospital, the Western regional referral hospital in Takoradi.

When the Daily Graphic got to the scene of the accident, it observed that there were no road signs to prompt oncoming vehicles of potential danger posed by the construction works.

At the scene, there was only a caution tape tied to a bamboo stick by the side of the excavated asphalt and there was also no sign prompting motorists from either direction.

In addition to the new humps under construction, the Daily Graphic team counted about 34 humps between Takoradi and Beposo.

The police and road safety officials have warned that constructing so many humps on highways was an aberration of international road safety standards and posed a danger to life and property.

Both vehicles have since been towed from the scene.