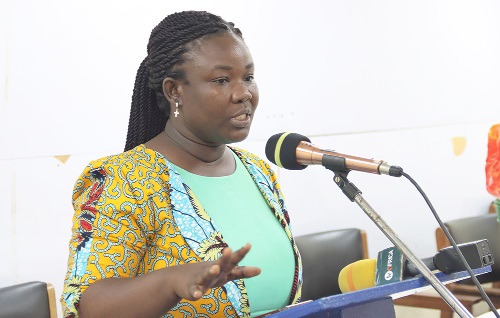 The National Coordinator for Gender Action in Climate Change for Equality and Sustainability (GACCES), Portia Adu-Mensah, has encouraged women to speak up about issues of climate change that negatively impact their lives.

She explained that this was critical because women were the direct victims of almost all devastating effects of global warming and its consequences, and that concerns expressed publicly would influence national and global decisions on the environment.

Mrs Adu-Mensah, who was speaking at a post-Conference of Parties 27 (COP27) conference organised by ABANTU for Development, also urged women to be abreast of issues in the country relating to climate in order to make demands on what bothered them.

"It's about time we started speaking about issues related to women when it comes to climate change, because we are at the forefront and we are mostly affected," she said.

The conference, which was on the theme: “Women as critical agents of change in the quest for climate justice,” brought together stakeholders in women and gender issues to discuss issues raised at the COP27 held in Egypt last month.

The Head of Programmes for ABANTU for Development, Grace Ampomaa Afrifa, said since 2008, the organisation had been working on gender and climate change matters as a key thematic area in mobilising and building the capacity of women.

She stated that climate change and its impacts in the country, persistent with incidents of changes in rainfall patterns, droughts in all the five regions in the north, low crop yield and various incidents of flooding, affected women and men differently.

“The roles that women have been ascribed to in the home as caregivers, managers of households and providers of meals, as well as their reproductive roles, further marginalise women in the face of climate change impacts. Women become more vulnerable and are less able to migrate in the events of displacement,” she said.

Those, she said, were coupled with the fact that because women were less represented in the decision-making spaces, women were not very much involved in climate change discussions and had less access to resources to adapt to the impacts of climate change.

For his part, the Executive Director for Climate and Sustainability Empowerment, Hussein Kassim, stated that the analysis of disaggregated data for climate and the country's National Adaptation Plan was critical for effective policy decisions.

He said the analysis involved examining current coordinates, coordinating mechanisms across ministries and improving upon these mechanisms.

Mr Kassim added that it was important to provide training and guidance on gender-sensitive and gender-responsive practices to mainstream gender issues.

"Statistical offices require training in the collection and analysis of disaggregated data so that they can work with other actors to produce such data to use for decision making and to disseminate the learning that is generated through the analysis," he said.