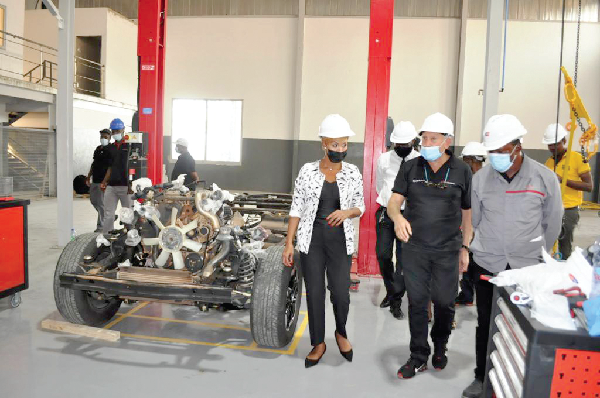 Trial assembly of the Nissan Navara is scheduled to start early in the New Year, with full production expected to commence in March 2022.

There is a considerable South African link to the plant, the Navara itself manufactured at Nissan’s African Light Commercial Vehicle manufacturing hub in Rosslyn, outside Pretoria, while the 12 key Japan Motors engineers and technicians, including the plant manager-designate, all underwent their Nissan training in South Africa earlier this year.

Ms Mason said she was impressed with what she saw and pleasantly surprised to see South African engineers working alongside their Ghanaian counterparts as they entered the final preparation phase for the official start of production early next year.

“I am happy to see the two teams working together. The President of South Africa, Mr Cyril Ramaphosa, was recently in Ghana to strengthen the bilateral relations between our two countries, and this is a perfect example of it. It inspires me to see the skills transfer as Ghana begins to develop its own automotive industry and become self-sufficient, creating jobs as well.

“I’ve observed how Japan Motors has all the capabilities, including meeting the Nissan Global Standards, to begin producing vehicles for Africans and by Africans” Ms Mason said.

Speaking on behalf of the South African engineering team, Mr Basil Mgidi said he was highly impressed by the skill set of the Ghanaian engineers.

“When we started working together, I saw how passionate they are to learn. Ghana has good engineers and technicians; we have a strong team to move forward,” he said.

Also present was Sales Manager, JMTC, Ms Wasim Deem Ahmed, who was given a tour of all sections in the brand-new plant, starting with the assembly line and ending with the tester line.

“The plant is on the verge of completion and the High Commissioner’s visit will act as extra motivation to produce the best vehicles in Ghana.”

“When you buy your Nissan Navara, you’re buying the toughest vehicle this global company has ever designed. It has been designed for Africa and built in Africa. You’re also buying peace of mind through the full after-sales service that Japan Motors offers across the length and breadth of Ghana,” he said.

Japan Motors, Nissan’s long-time distributor in Ghana, has invested US$8 million into building the assembly plant.

Nissan chose Japan Motors as its local assembly partner following the signing of a memorandum of understanding between the Japanese car maker and the Ghanaian government in 2018 when Nissan became the first Global original equipment manufacturer to commit to support the creation of a sustainable local automotive industry.