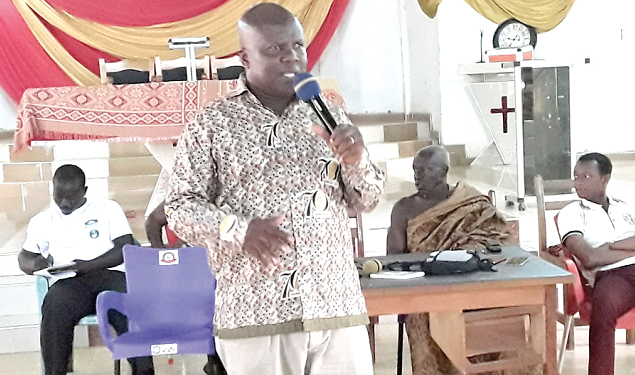 The Ghana Cocoa Board (COCOBOD), in conjunction with the Ministry of Lands and Natural Resources, has launched a programme to encourage cocoa farmers to adopt cocoa cultivation to enable them to stay in business in the face of climate change and its attendant negative effects on the cultivation of crops

Under the programme, cocoa farmers are being provided with tree seedlings for planting while being encouraged to nurture small trees within their farms instead of cutting them down during the preparation of their farms.

The programme forms part of measures adopted by the government to meet the United Nations (UN) Sustainable Development (SDG) Goal 13, which promotes the integration of climate change measures into national policies, strategies planning.

The Cocoa Health and Extension Division of the COCOBOD (CHED) on Friday, August 3, 2018, separate forums at Akrodie in the Asunafo North municipality, Acherensua in the Asutifi South District and Old Brosankro in the Tano South municipality to cocoa farmers to the Climate Smart Cocoa Cultivation programme.

Speaking at one of the forums at Akrodie, the Brong Ahafo Regional Manager of CHED, Emmanuel Nii Tackie-Otoo, explained that in the face of climate change, there was the need for cocoa farmers to adapt to the changing circumstances in order to continue to stay in business and make enough profit.

“It is now a fact that because of climate change, the weather conditions and periods have changed. The rains will not come at the right time and when they come, we get more than necessary and we get more sun than we need,” he said.

Tackie-Otoo explained that it was, therefore, incumbent on cocoa farmers to intersperse their cocoa farms with other trees and other best farming practices in order not to suffer the debilitating effects of climate change.

He indicated that besides cocoyam and plantain suckers and cassava, among others, cocoa farmers were also being supplied with economic tree seedlings to provide shade to their young cocoa trees, adding that the size of a farm determined the number of economic trees that would be supplied to a farmer.

According to him, between 15 and 18 economic tree seedlings should be planted in a one-hectare cocoa farm, explaining that because of past experiences, cocoa farmers would want to chop off young economic trees during the preparation of their farms.

He stated that while the cocoa farmers were being educated to the cocoa cultivation methods, they were also being certified to own the trees they plant to be able to sell them in future when they mature.

“In that instance, no timber merchant can go behind cocoa farmers to harvest trees from their farms without their consent,” he stated.

For his part, the National Technical Officer of CHED, Oduro Baah, stated pruning of cocoa farms, alongside artificial pollination, which was piloted this year by COCOBOD, would be continued and extended next year to enable beneficiary cocoa farmers to accrue the desired yields from their farms.

In addition, over-aged and diseased cocoa trees, which constitute about 40 of the cocoa trees, would be cut down for replanting from October, this year, he stated and gave an assurance that affected cocoa farmers and caretakers would be compensated during the programme.

The Deputy Brong Ahafo Regional Manager for CHED, Abdul Majeed Mumuni, advised cocoa farmers to use only COCOBOD certified insecticides and pesticides to control diseases in their farms to avoid the use of fake products to destroy their trees.

Some of the farmers who spoke to the Daily Graphic commended the government for the supply of inputs but suggested that such inputs should be supplied at the appropriate time to yield the desired effect.