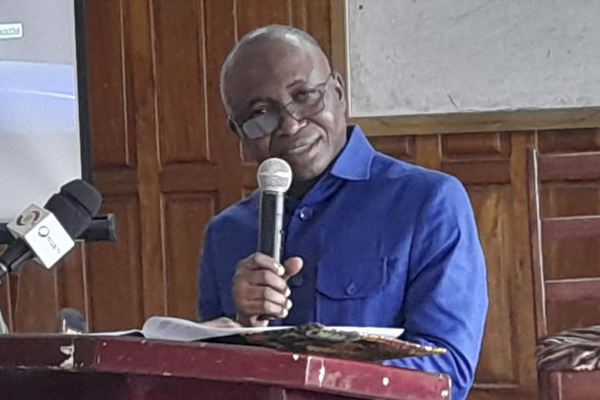 Prof. Elvis Asare-Bediako, the Vice-Chancellor of University of Energy and Natural Resources

A Senior Lecturer at the School of Mines and Built Environment of the University of Energy and Natural Resources (UENR), Sunyani, Dr. Wadood Moomen, has called for the proper structuring, monitoring and regulation of artisanal small-scale mining (ASM), saying it has proven to have the potential to emancipate many rural people from poverty.

He said the current nature of small-scale mining made it difficult for authorities to appraise its negative and positive impacts to economies of African countries where they were practised.

Dr. Moomen made the call in a paper delivered on his behalf at a symposium to discuss the need to use smart technologies to control illegal mining and illegal logging in the country.

Last Friday’s "Smart Systems Symposium 21", organised by the School of Sciences of UENR, brought together academics, industry players and students to brainstorm on illegalities associated with the mining of gold and harvesting of wood, and how technologies could be used to control such activities.

Dr. Moomen observed in his paper that in the last three decades, there had been relevant discussions on small-scale mining at various international, regional and national platforms due to its closeness to poverty.

"In both historical, present and future terms, the ASM sub-sector has proven to have the potential to emancipate many rural folks out of poverty, if properly structured, monitored, regulated and orchestrated responsibly," he stated.

Dr. Moomen said the call for the use of smart technologies in mining and logging in the country should be considered since they had unique capabilities to address problems associated with the two areas.

He said smart technologies were necessary since they had prospects of monitoring and mapping a comprehensive understanding of resource potential, production and cumulative economic and environmental impacts of illegal mining operations at the national and local scales.

He added that international, national and non-governmental organisations had realised that the integrating tools such as smart sensors in the monitoring of small-scale mining activities could help governments and communities by increasing security, creating path towards socially responsible mining, and ensuring that safer and environmentally sustainable mining was employed.

"If the government embraces technological developments and encourages the engagement of the youth within the mining sector, there is an assurance of bright future for our mining industry," he said.

Dr. Moomen, however, called for more to be done at the regulatory level to increase affordable internet access so that more people could participate in the economy of information.

The Vice-Chancellor of UENR, Professor Elvis Asare-Bediako, observed that the uncontrolled activities of small-scale miners had caused an enormous destruction to the beautiful landscape in mining areas of the country.

"I have observed with much deep concern the increasing rate at which individuals engage the service of foreigners to destroy the national reserves of the country. If care is not taken to address the spate of forest depletion in Ghana, the future leaders of our dear nation will rise to blame us," he lamented.

Prof. Asare-Bediako added that since the uncontrolled activities of illegal miners were adversely affecting water bodies, vegetation, wild animals, human health and safety, there was the need for the regularisation or abolition of such activities, while abandoned mining sites across the country should also be restored.

The acting Pro Vice-Chancellor of UENR, Professor Felix Adebayo Adekoya, explained that the Smart Systems Symposium series was to stir and stimulate ideas, innovations and discussions towards a digitised Ghana.

"Succinctly, we hope to inform, shape and influence social, economic and government policies, as well as researches through the symposiums,” he stated.