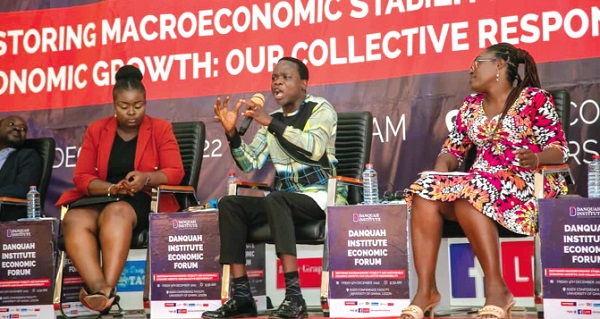 Dr Domfeh (middle) making his contribution at the economic forum organised by the Danquah Institute in Accra
30.5k Shares

A Development Economist, Dr George Domfeh, has urged the government to set up a committee with the aim of enhancing local rice production.

Dr Domfeh made the call at an economic forum organised by the Danquah Institute in Accra last Friday.

“Ghana imports $1.2 billion worth of rice annually. This can be reduced drastically if we concentrate on local production of rice,”he stated.

Dr Domfeh proposed that in order to ensure that there were no lapses as local rice began to take a greater share of the market, the committee would devise, monitor and engage people within the rice sector.

“This will include varieties for production, processing, marketing and final consumption,” he stated.

He added, “ the government must set up a rice committee to help local rice production. Importers of rice, farmers and political parties must be part of this committee to look at ways to grow rice locally.”

He also stated that when that was done, not only would it stem the rapid fall of the cedi but also create jobs for Ghanaians who would earn more and pay taxes for economic growth and development.

Dr Domfeh said the failure to take such measures, over the years, had contributed to the high demand for foreign exchange for imports, which played a part in running to the international bond markets to borrow to shore up forex reserves.

“We have to manage our economy well by simply paying attention to some of the key sectors that drive economic growth, “ he said.

To that end, he suggested that the agricultural and manufacturing sectors must be linked and raw materials from agriculture should be turned into finished goods through manufacturing.