Septuagenarian dies from fire in his home 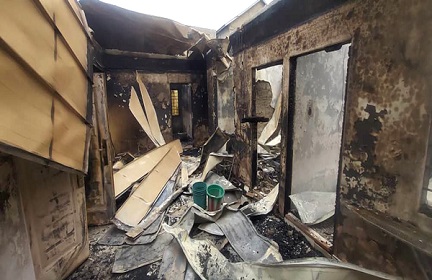 A 74-year-old man on last Saturday dawn, lost his life when fire gutted his five-bedroom house at Aburaso New Agric Nzema in the Atwima Kwanwoma District of the Ashanti Region.

The deceased Septuagenarian, identified as Stephen Dapaah, former Ashanti Regional Director of the Audit Service, was trapped in his room when the fire engulfed the house in the early hours of Saturday, September 9, 2022.

The Ghana National Fire Service has since launched an investigation into the incidence which was said to have occurred at around 1 a.m.

Five other occupants of the house who also suffered injuries, have been rushed to the Komfo Anokye Teaching Hospital where they are receiving treatment.

All contents of the house were burnt into ashes and the cause of the fire was yet to be determined.

This brings to four the number of death recorded in fire incidence within the last four weeks and 15 since the January this year.

On August 16, this year, a pregnant woman and her two sons were trapped and burnt to death when their room was caught up in a fire incident at Ohwim.

According to the Ashanti Regional Public Relations Officer for the Ghana National Fire Service, Divisional Officer (DOIII) Peter Addai, the figure represented more than 100 increase in the figure recorded for the same period for last year which was five.

So far, he said, the region has recorded more than 700 cases of fire incidences in the region ranging from bush, domestic and industrial fires.