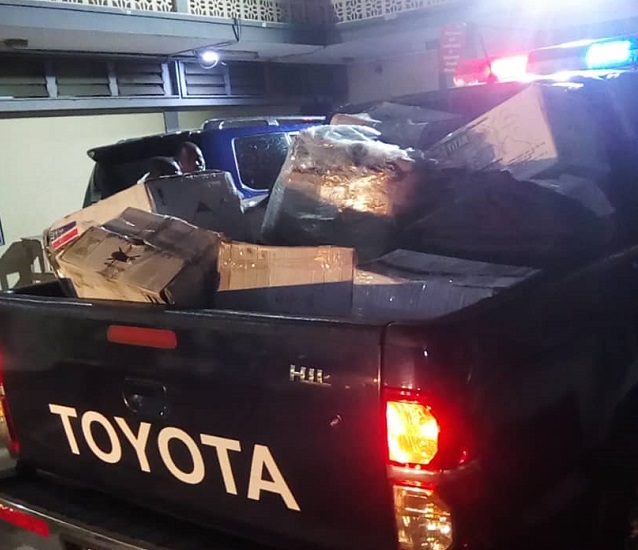 The seized pistols and ammunition being transported

The Ghana Revenue Authority (GRA) says it is worried at what it called mischievous and premature information that sought to imply that some 436 pieces of pistols and ammunitions seized at the Tema Port on Friday were being kept to be released to some ‘big men’.

According to the Authority, the issue is under police investigations and the seizure of the weapons were to allow for proper investigations since the container carrying the arms failed to declare them on arrival.

A statement issued in Accra on Sunday by the Assistant Commissioner in charge of Communications and Public Relations, Ms Florence Asante indicated that the said container which described its contents as personal effects, household goods and a carding machine, was flagged as ‘Red Channel”, thereby necessitating the need for a physical examination to be conducted on it.

“The examination revealed 18 packages identified as restricted items were found in the container and these include 436 Pistols (side arms), 26 packs of 50 pieces of ammunition and one (40ml) piece of pepper spray,” the release said.

Permit
The statement stressed that the items had been imported into the country without the requisite permits from the Ministry of the Interior, and such were not declared to Customs on arrival.

It said that an inventory of the items was taken in the presence of officers of the Preventive wing of the Customs Division made up of intelligence and examination officers, officials of the Bureau of National Investigations, National Security and the Police with all the representatives, including the clearing agent signing against the total number of arms and ammunitions seized.

Seizure Notice
Following the inventory, the statement said a seizure notice was issued to the clearing agent and the seized consignment was placed in the custody of the Customs Division, with the clearing agent currently assisting the Marine Police Unit with investigations.

The outcome of the investigations by the police on the restricted items, she said, will be made public when concluded.

The statement cautioned all importers that the importation of arms and ammunition could only be carried out with a permit by the Ministry of the Interior and these items must be declared on importation.

“We also assure the general public that the Customs Division will not relent on its regulatory duties at the nation’s ports and other points of entry to ensure the safety of all citizens,” the statement said.

Commissioner General
The Commissioner General, Mr Ammishadai Owusu-Amoah had told Graphic Online on Saturday that apart from the clearing agent, six other individuals identified as owners of some of the parcels in the container were picked up to assist the police in investigations.

According to him, since the GRA has handed over the case to the police to conduct the investigations, and until the police finish its work, they may not be able to release the arms.

“For now, we don’t have any documentation to prove that duly the consignments were supposed to have entered into the country legally,” Mr Owusu-Amoah told Graphic Online on Sunday.