‘Seed breeders can recover their investments with PPB’ 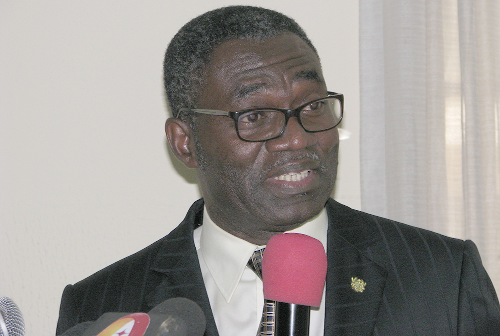 The Minister of Food and Agriculture (MoFA), Dr Owusu Afriyie Akoto, and other stakeholders in the agricultural sector of the economy have called on Parliament to expedite action on the passage of the Plant Breeders Bill (PBB) into law.

In a speech read on his behalf by a Deputy Minister of MoFA, Mr William Kwaitoo, Dr Afriyie Akoto stated that a system of protection was required to allow breeders to recover their investments.

He said agriculture could also not be conducted in a sustainable manner without innovation; hence the Intellectual Property Protection model proposed under the PBB.

The minister made the statement at a national seminar in Accra on the Arusha Protocol for Protection of New Varieties of Plants.

“Indeed, quality seed production as a key input for improving productivity and crop production, as well as ensuring food security, has a great bearing on other inputs such as fertiliser, agro-chemicals, irrigation and skilled labour,” he pointed out.

Dr Akoto said demand for improved seeds in the country continued to grow and urged the formal and informal sectors of the economy to form alliances to meet those needs.

“It is a known fact that among the major challenges facing the agricultural sector in many African countries (including Ghana) is the lack of seeds of improved crop varieties and this is among major factors contributing to low crop production,” he said.

But there were no protection systems in place, while new varieties were appropriated by other countries and businesses and were using them for free without recognising the effort and investment put in by breeders.

“I trust that after today’s seminar, knowledge and information gained will motivate Ghana to proceed to act without delay the passage of the PBB into law in compliance with the 1991 Convention of the International Union for the Protection of New Varieties of Plants,” he said.

“Evidence points to the fact that countries with weak protection of intellectual property regimes, provide no incentives for their people to create or innovate nor do they attract new technological investments,” he added.

He said ARIPO was playing an important role as it provided a platform for member states to harness benefits of collaboration and synergies.