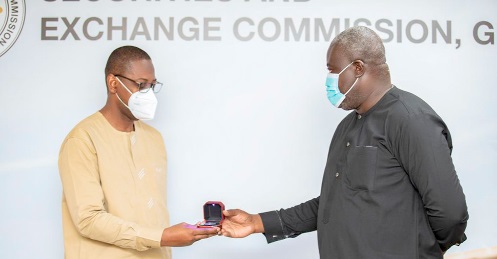 The Securities and Exchange Commission (SEC) identifies with the Otumfuo Commemorative Gold Coin because it can lead to wealth creation, the Director-General of the Commission, Rev. Daniel Ogbarmey Tetteh, has said.

Consequently, he has encouraged Ghanaians to ensure that even as they buy into the Asantehene’s legacy of peace, they should also think about the culture of savings and investment.

Speaking when he received the Otumfuo Commemorative Gold Coin on Friday, February 11, 2022, from a delegation that called on him, the SEC boss said one thing that could drive the nation’s progress was wealth creation, which was one way the people could have the peace of mind to go about their daily activities.

Rev.Tetteh explained that SEC had a mandate to ensure that people’s monies and investments with financial institutions were safe.

“When you look at some of the incidents that happened in the last few years, especially when we had the financial sector clean up, there were pockets of agitations around and they were all connected to monies being locked up,” he said.

He explained that the mandate of SEC was to ensure that players in the financial sector did what was right to ensure that the monies that people, through their sweat and toil, put aside in savings and investments were well protected.

The director-general added that SEC would ensure that the market operators did what was right because when wrong things were done, they could create a lot of disturbances.

Rev. Tetteh bemoaned the craze for quick money in the country, and expressed surprise how Ghanaians continued to fall to Ponzi schemes.

He warned perpetrators of the act that SEC had formed a stronger alliance with the law enforcement agencies and anyone caught would be dealt with by the law.

“So Ghanaians, let’s be more discerning and begin to ask questions when we are being promised something that is too good to be true, especially how they are able to generate that much they promised you,” he advised.

Rev. Tetteh said the Otumfuo commemorative gold coin was worth it; since it celebrates the legacy of Otumfuo Osei Tutu II.

He, therefore, commended the E ON 3 Group and its partners for the initiative.

“We are happy to throw in our support where it is possible to ensure that we entrench peace in our country,” he said.

He added: “Apart from his peace initiatives, he had also been contributing to the development of the country in diverse ways.”

Rev. Tetteh indicated that the road map outlined by the E ON 3 Group and its partners to let every Ghanaian get a piece of the gold coin so as to share in the legacy of Otumfuo was very commendable.

Rev. Ogbarmey Tetteh expressed deep appreciation to the organisers of the commemorative gold coin initiative for the honour done him as one of the select group of Ghanaians to be seeing a piece of the coin.

“I deem it as an honour and I am humbled by that gesture,” he said and added that he was also happy to be part of the unveiling of the coin in Kumasi in December last year.

Speaking on behalf of the delegation that presented the gold coin to the SEC boss, the General Manager of the E ON 3 Group, Mr Jesse Agyepong, said the peace initiative of the Otumfuo could not be taken for granted.

He said the nation needed peace to develop that was why everything was being done to support the king in that respect.