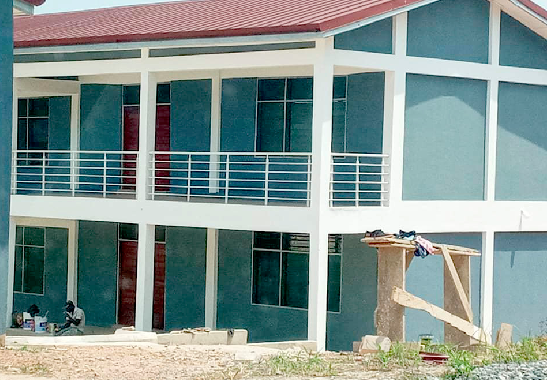 A completed project at the Archbishop Porter Girls SHS in Takoradi
30.5k Shares

This follows the improvement in infrastructure at the schools which hitherto were constrained to use limited classrooms, dormitories, among others. The entire region has 38 senior high schools (SHSs) out of which 26 were previously on double track and 12 on the single track.

The managers of the schools who spoke on condition of anonymity said hundreds of parents, especially those from other regions, had visited and picked prospectuses, ahead of the planned reopening day of March 18 to March 21, 2021.

Apart from those arriving for their prospectuses, others are yet to visit the schools. “Currently, we cannot tell you how many students we have on our list for admission because we are yet to receive the statistics,” one of the managers said.

At some of the schools visited, the noticeboards showed that there were more than 500 students assigned to schools but not all the students had reported to pick up their prospectuses.

The heads of the schools are of the view that the admission list posted on the noticeboard may not be final since they are still receiving those using the digital platform for self-placement.

Some of the “big schools” in the region, such as Half-Assini Senior High, Takoradi SHS, GSTS, Nsien Senior High, Tarkwa Senior High, Archbishop Porter Girls have better facilities to manage the situation.

Many of these schools have construction works ongoing while others have their structures completed and electricians busy wiring in readiness for the arrival of the students for academic work.

At the Archbishop Porter Girls SHS, St John’s School, and many others across the region, there are several ongoing projects aimed at creating more space for students.

However, other schools, especially the day schools need help in terms of academic infrastructure to enable them to meet the growing demands, since their facilities are not up to date.

At the Esiama SHS in the Ellembelle District, which was a day school but later converted into a boarding facility, it was found out that they did not have enough facilities even for the current number of students.

At the moment, the school needs a 16-unit classroom block, additional two dormitories, bathrooms and toilets for the new students arriving.

The school authorities explained that textbooks, exercise books and uniforms would be taken care of by the government and students were to use their check dresses in place of the uniforms.

The parents were also made to understand that the textbooks provided would exclude that of the students’ elective subjects, which are also not readily available, but is believed would not disrupt academic work.

The parents were made to procure some exercise books for their children’s use until schools receive supply from the government through the Ghana Education Service (GES).

The Daily Graphic’s interactions with some parents and teachers revealed that the extension of the reporting day for SHS 1 students had brought great relief to them since it had eased the pressure of meeting the deadline.

In its last statement, the GES said the action was taken to allow students who had problems with self-placement time to finish the process, especially students who had not completely gone through their schools’ admission procedure.

Some of the schools visited confirmed the daily receipt self-placement information, adding that they immediately worked on the data and forwarded it to the secretariat for processing.

Those who were posted to schools that do not have boarding facilities, however, have little time to find one before schools reopen.

In the metropolis and other parts of the region, fresh students are yet to report since the reopening date was changed.  The rescheduling, some said, would also give them more time to prepare for the children since there was more to be done.

At the schools ahead of the reopening, some parents who had arrived to pick prospectuses were not happy with the long list of supplies they had to buy.

One of the parents, who wanted to be identified only as Maame Ama, said: “We know we have to buy some stuff, but the list is too long, if we have to buy all these items, it means we have to find between GH¢1,500 and GH¢2,000.

She said apart from the usual items such as scrubbing brush, cutlass, brooms, trunks and other toiletries, it was too much to ask them to provide personal protective equipment, detergents, padlocks and cleaning tools.

Some parents also said they did not get the first and second choices for their children. “We were posted to schools that we have to struggle to locate. Our journey from Accra to Esiama was torturous, I did not even know where to board vehicles but it’s all good and the extension has helped,” one parent said.

A visit to some communities in some districts revealed that even though there is a Free SHS policy, parents are finding it difficult to meet the demands in the prospectuses.

However, in the region hundreds of the students are receiving support from companies such as Tullow Oil Ghana and Yinson Production Ghana.

Students who are fortunate to be captured under the corporate support receive everything on the prospectus list, provisions, shoes, sandals, and housedresses, hostel fees for those who did not get boarding schools and daily stipends.