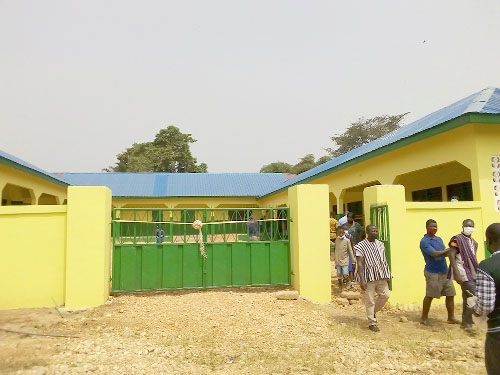 A six-unit classroom block constructed at a cost of GH¢500,000 for pupils of the the Akyem Nsutam Muslim Community in the Fanteakwa South District of the Eastern Region has been inaugurated.

The project, funded by the District Assemblies Common Fund (DACF) with the support of the Member of Parliament for the Fanteakwa South Constituency, Mr Kofi Okyere Agyekum and the District Chief Executive for the area, Mr Kwesi Adjabeng Ntori, has brought relief to the pupils who studied in a dilapidated building that exposed them to the vagaries of the weather.

The new building, which have other facilities such as a staff common room, a library, a store room, a urinary and a place of convenience among others are meant to promote the teaching of both Arabic and secular education.

Speaking at a short ceremony to inaugurate the new facility last Tuesday, the MP for the area, Mr Agyekum explained that his vision for the Akyem Nsutam Muslim Community was to promote the teaching and learning of Arabic and secular education.

He intimated that his commitment to ensuring the provision of quality and affordable education would continue be his priority.

The building, Mr Agyekum stated, would facilitate effective teaching and learning in the school and shape the future of the pupils.

Mr Agyekum appealed to the assembly to furnish the school with the needed facilities, especially dual desks to enhance the academic work of the pupils.

He said a conducive environment was a prerequisite for teaching and learning in school.

The DCE for the area, Mr Ntori said it was worrying that some parents stopped their children from going to school, adding that it was only through education that people got out of poverty.

He, therefore, urged parents to enrol all their children of school age in school and encourage them to study hard in order to better their lives in the future.

Mr Ntori advised users of the facility to take proper care of it to enhance its lifespan.

The District Education Director, Mr Mathew Adu-Bobi, was grateful to the MP and the assembly for responding to the appeal made by the chiefs and the people to get a new facility to enhance teaching and learning.

He urged the chiefs and the people of the community to pay attention to the school and treat it as theirs, saying that they should also protect it from deteriorating.

The Chief of Akyem Nsutam, Osabarima Kofi Sarpong Kumakuma, commended the MP and the DCE for their commitment and dedication to construct a new Islamic Primary School at Akyem Nsutam.

He expressed his appreciation to the Nawara Company Limited, a small mining concession in the area for its support in the development of the community.