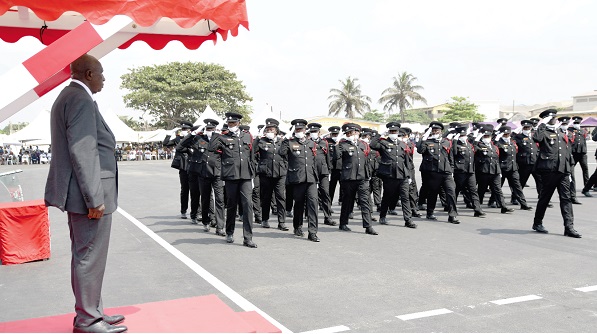 Mr Ambrose Dery (left), Minister for the Interior, taking salute at the graduation parade of the Intake XXI of the GNFS. Picture: EBOW HANSON Follow @Graphicgh

The Minister for the Interior, Mr Ambrose Dery, has tasked the management of the Ghana National Fire Service (GNFS) to collaborate with necessary stakeholders to find ways of establishing healthy and safe building practices, especially with the use of burglar proof to prevent people from being trapped during fire outbreaks.

He noted that many lives and property had been lost as a result of such incidents which demanded for action to be taken to help forestall the incidence of trapped to “death cases” we record in the country.

Mr Dery, who was speaking at the graduation ceremony of Cadet intake XXI of the GNFS as the reviewing officer, said fire outbreaks occurred when people overlooked basic fire safety practices, especially in the design of buildings used for either residential, industrial, institutional and/or commercial purposes.

Making reference to some recorded cases of such nature, including the family of seven who lost their lives at Buduburam and the incident at Appiatse, Mr Dery said safety practices should be key to protect lives and property.

He commended the management of the GNFS for their efforts to deal with fire incidents and urged them to intensify fire safety education to include sensitisation to the handling of hazardous materials by the public to curb fire outbreaks.

“It is increasingly clear that our actions and inaction are very crucial in the management of fire outbreaks. We should equally do our best to put in place safety measures to prevent fire outbreaks with the resulting damage to property,” he added.

Mr Dery noted that government was aware of the logistical needs of the GNFS and that it would resolve the problem by providing resources the service needed to effectively and efficiently deliver on its mandate.

The decision taken by the service to upgrade the status of its serving officers, he said, was in accordance with government’s policy of continuous education and training for all service personnel to ensure high professional standards.

The minister further urged the public to pay attention and put into practice fire safety messages put out by the GNFS to ensure a safe country.

The 368 officer cadets were serving officers of the GNFS who were eligible for promotion into the senior officer corps having passed the promotion examination and selection process.

The Intake Twenty-One (XXI) is comprised of 240 males and 128 females from the various regions across the country.

The training programme was tailored to expose the officer cadets to managerial skills and tenets of officership required at the senior cadet corps of the GNFS.

These officership skills and concepts were delivered across subjects such as public speaking and media relations, public finance, organisational behaviour, command, leadership and management, information management, work ethics, corporate image among others.