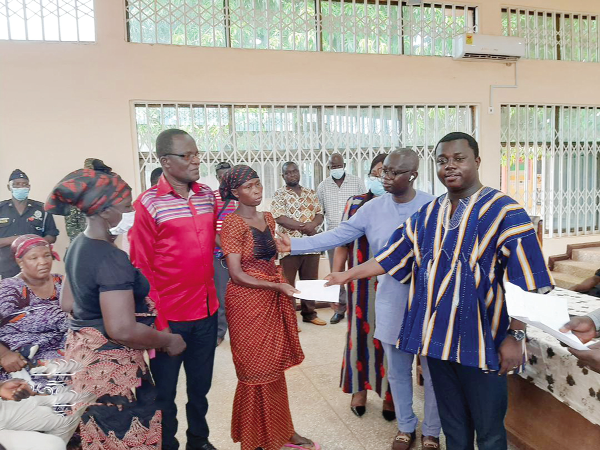 Mr John Ntim Fordjuor (right), Deputy Education Minister, presenting some money to the bereaved families. Behind him is Prof. Opoku-Amankwa

The Ghana Education Service (GES) has interdicted the Headmaster of the St Charles Junior High School (JHS) in Saboba in the Northern Region in connection with the drowning of nine children of the school.

Consequently, a committee has been set up to investigate the incident as a matter of urgency and apply the required sections on Mr Emmanuel Chinja.

The Director-General of the GES, Professor Kwasi Opoku-Amankwa, who disclosed this, also condemned the action of the headmaster in sending the students to work on his farm, leading to their death.

"What he did is a clear violation of our code of conduct. You are not supposed to use children for labour, and once he has done that, we are going to apply the rules and regulations to ensure that the proper thing is done,” he stated.

“We have asked that he be interdicted, a committee put in place to investigate the matter and then we apply the required sanctions,” Prof. Opoku-Amankwa said.

The GES Director-General was part of a government delegation to Saboba to commiserate with the bereaved families.

The delegation visited the bereaved families to commiserate with them and also attended a mass organised to pray for the deceased.

They also visited the St Charles JHS to console the students and the teachers.

Nine students of the St Charles JHS drowned last Friday evening when they were crossing the River Oti in a canoe which capsised.

The victims were among 31 students of the school who had allegedly gone to work on their headmaster's farm earlier in the day and who got drowned while returning home in batches.

The nine were in one of the two boats the children were on, while 21 of them swam to safety.

The court, presided over by Mr Amadu Issifu, declined an appeal by counsel for the accused for bail and remanded him to reappear on Monday, November 29, this year.

Prof. Opoku-Amankwa warned teachers to desist from using students as their labour force.

He also appealed to the bereaved families to remain calm and use the appropriate channels to ensure that justice was served.

For his part, Rev. Fordjuor expressed the government's resolve to ensure that justice was served the deceased and their families.

He said the practice of teachers engaging students on their farms and other activities outside the stipulated school activities was unlawful.

The deputy minister added that teachers who would be caught indulging in such practices would be made to face the full rigours of the law.

The Paramount Chief of Saboba, Ucha Borbor John Bowan, commended the government for the swift response to the incident and said it had brought some hope to the affected families that justice would be served.

He called for the complete overhaul of the GES office in the district, saying: "What is currently happening in the office is not the best; it is affecting educational standards".