Russia to blame for food insecurity in Africa - US 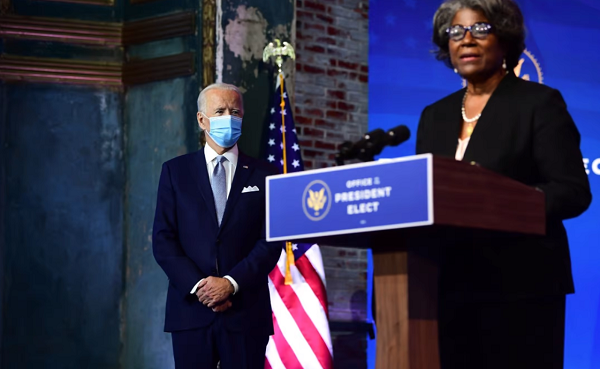 The U.S. ambassador to the United Nations, Linda Thomas-Greenfield has stated that "Russia’s unprovoked attack on Ukraine" is the reason for a food insecurity crisis on the African continent.

According to her, the conflict has led to price increases and additional suffering for Africans.

Speaking in an interview on CNN before the start of a three-nation trip to Africa, Ambassador Thomas-Greenfield rejected suggestions by Russian Foreign Minister Sergei Lavrov that sanctions imposed by the West on Russia had caused the rise in food prices.

She added that Russian food and agricultural products were not affected by US sanctions.

"What we are concerned about is that that narrative is not factual. The reason that there is a food insecurity crisis on the continent of Africa at this moment is because of Russia’s unprovoked attack on Ukraine," she said.

"These countries are dependent on about 75% of their food aid from Russia, as well as from Ukraine. And this unprovoked war has led to shortages, it has led to price increases, and it has led to additional suffering of the people on the continent of Africa.

"Russian food is not sanctioned by our sanctions. There are no sanctions on any agricultural products from Russia. So, it is completely a disinformation, misinformation campaign in which Russia does not want to accept responsibility for what they have done to international food markets across the continent of Africa".

Ambassador Thomas-Greenfield is scheduled to deliver a keynote address in Ghana on the global food security crisis tomorrow.

Ukraine grateful to Ghana, 10 others for backing resolution vetoed by Russia

Her comments come a week after the Russian Embassy in Ghana shared a list of Ghana's imports of agricultural and food products in 2021 to back earlier claims that the invasion of Ukraine was not to be blamed for Ghana's rising food prices.

ℹ️ Dear readers, here are some figures summed up by the Embassy for you to think about. 🤔 🤔 🤔 pic.twitter.com/gMpUG3sJbv

According to the Embassy, the Ghanaian media had fallen for a ploy by the West to blame Russia for increasing food prices worldwide.

In a series of tweets, the Russian Embassy accused the media of deliberately ignoring the fact that policies of the West had triggered economic challenges on the African continent since 2020.

"The Ghanaian press continues to carbon-copy the Western mainstream trying to persuade local readers that the Russian special military operation in Ukraine is to blame for the increase in bread prices," the Russian Embassy said in a tweet.

"At the same time, journalists shyly keep silent that food and energy prices began to rapidly rise already in early 2020 due to systemic miscalculations of the financial and economic policies of Western countries during the coronavirus pandemic".