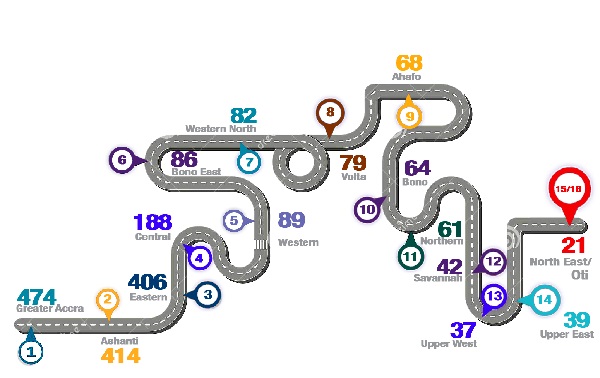 For the first time in decades, road crashes, deaths and injuries have reduced consistently for 11 months. With barely a month to the end of the year, statistics from the National Road Safety Authority (NRSA) show that deaths from road crashes reduced by 18.2 per cent — from 2,654 in 2021 to 2,171 between January and November this year.

Additionally, there is a marginal improvement in the number of people who sustained injuries in road crashes as 14,239 were injured this year compared with 14,393 in 2021.

In terms of vehicles, the statistics showed that 23,529 cars were involved in road crashes as against 25,130 within the same period last year, representing a 6.4 per cent reduction in the number of vehicles involved in the crashes.

A breakdown of the figures indicated that 7,925 commercial vehicles were involved in road crashes this year compared with 8,791 last year, representing a decline of 9.9 per cent.

Similarly, 10,628 private cars were involved in crashes this year as against 10,748 within the same period last year, indicating a marginal reduction of 1.1 per cent.

The statistics further revealed that motorcycles witnessed the biggest reduction in road crashes of 11 per cent from 5,591 in 2021 to 4,976 this year.

The figures further revealed that 298 persons were killed in the road crashes this year.

The statistics also showed a relatively high road traffic death ratio (6:1) for adults as compared to children within the period.

The Director-General of the NRSA, David Osafo Adonteng, told the Daily Graphic that the development could be attributed to the high risk of exposure of adults to traffic incidences as compared to children.

In terms of the sex distribution of road traffic fatalities, the statistics indicated that 1,708 were males, representing 79 per cent of total deaths, as compared with 463 females over the period.

Although there is improvement in road crashes, deaths and injuries, Mr Adonteng said the progress was not enough to achieve the target of halving road crashes and related deaths by 2030.

He said it was in that regard that the NRSA had ramped up efforts to stem the tide.

Mr Adonteng said the authority had started engagement with key stakeholders in the road safety ecosystem to help to reduce the crashes and deaths on the road.

For instance, he said, for the past two weeks, the NRSA had held discussions with the Inspector-General of Police (IGP) on how to strengthen the enforcement of road traffic regulations to address carnage on the road.

"We had very fruitful discussions with the IGP and explored ways by which we can work together to make our roads safe and I am sure that we will begin to see results," he said.

He also said the NRSA had started visiting transport operators to solicit their support for road safety education.

"We have visited transport operators such as OA, PM Express and Royal VVIP to ask for their support. From tomorrow, we will continue to VIP, Intercity STC Coaches Limited, Metro Mass Transit and the Ghana Private Road Transport Union. We want all of them to play their roles well so that we can jointly deal with road crashes," he said.