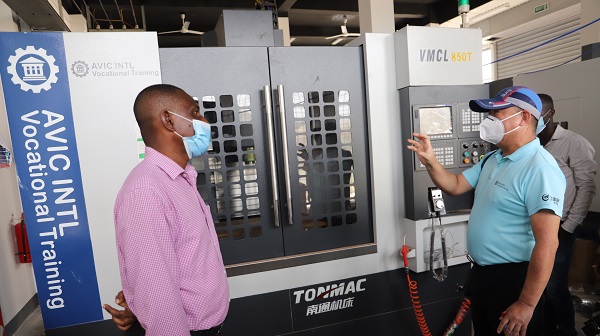 The upgrading and retooling of workshops in technical and vocational education and training (TVET) institutions across the country are at advanced stages of completion.

The Deputy Minister of Education in charge of TVET, Ms Gifty Twum-Ampofo, who disclosed this to the Daily Graphic, said work done in the various institutions was between 75 and 99 per cent complete.

But for the COVID-19 pandemic, all the work would have been completed, she said.

Ms Twum-Ampofo said work on workshops for the 10 TUs and 10 of the TIs had been completed, while the ministry was expected work on the NVTIs to be completed in April this year.

“We started with expansion, face-lifting and modernisation of our TVET institutions. We have facilities from a number of foreign partners. One is Planet One of the UAE, which is responsible for the renovation, expansion and facelift of all the 34 NVTIs, as well as the headquarters of the Opportunities Industrialisation Centre (OIC).

“Then we have AVIC International China also building modern workshops and laboratories in 13 technical vocational institutes (second cycle) and 10 TUs. The company is also building a modern workshop with the installation of 21st century equipment,” she said in an interview.

During a visit to the TTI, it was observed that the various departments, including Mechanical Engineering, Solar PV Technology, Electrical and Electronics, had been retooled with the latest equipment for effective teaching and learning.

The heads of the departments expressed excitement at the installation of new equipment, saying that after going through training, students would be well-equipped to work on the job market.

Some of the modern equipment at the Engineering Department at the Tema Technical Institute. Picture SAMUEL TEI ADANO

According to them, the new equipment would also result in the use of less power, unlike the obsolete ones that demanded more power to operate.

A tutor at the Electronics Department of the TTI, Mr Frederick Gyamera Frimpong, said “before this equipment came in February, 2021, we were using old analogue equipment and the new ones will help us teach our students current trends”.

The team also saw that a new AVIC constructed workshop, stocked with modern equipment, had been completed.

In the facility were equipment used for welding and fabrication, as well as tools for mechanical and automobile engineering.

In addition, it had standby generators, a borehole, teaching laboratories, spare parts for equipment and storerooms.

At the Mechanical Engineering Department, it was observed that the institute still used lathe machines that were imported from the then Union of Soviet Socialist Republic (USSR) in the 1980s.

They were manufactured in 1964 and used for shaping metals or wood. Their main use is to remove unwanted parts of a material, leaving behind a nicely shaped workpiece 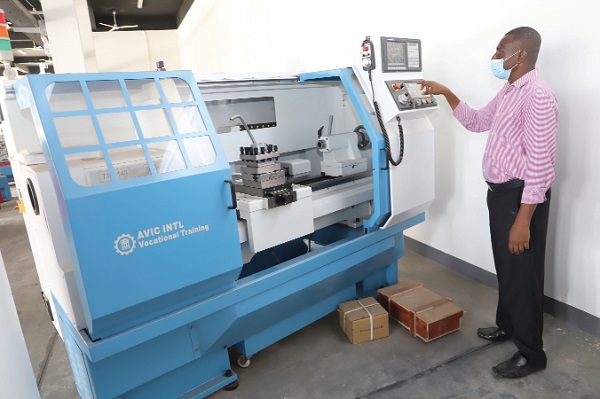 Mr Isaiah Akure, Head of the Engineering Department at Tema Technical Institute, explaining one of the functions of the equipment at the department. Picture: SAMUEL TEI ADANO

Sharing her thoughts on the retooling and upgrading of equipment, as well as the building of a modern workshop, the Vice-Principal of the TTI, Mrs Vivian Azumah, said the authorities were excited about the developments, adding that “the modern equipment will enhance our work very much”.

“As the world is improving through technological advancement, we have modern equipment from which students will benefit to meet that advancement. So the old ways of doing things will become a thing of the past.

“For skills training, you use technology which is dynamic, and in line with the latest developments in the world, the government brought us these machines so that our students can have hands-on practical training,” she emphasised.

Regarding maintenance and training of staff on the use of the equipment, Mrs Azumah said that had been taken care of and explained that there were schedules of maintenance for each of the departments, which were standardised.

“The staff were trained on the use of the equipment that has been installed. The training is ongoing and when those undergoing the training come back, others will go and have their turn,” she said.

Ms Twum-Ampofo said the government, in 2018, revived a collaboration it had had with Vase Austria since 2004 to rebuild and modernise technical and vocational school workshops, adding that the first phase of the project, which was completed in 2005, covered four TVET institutions — the Have TI, the Sacred Heart TI in Accra, the St Joseph’s TI at Kwahu Tafo and the Methodist TI at Kwadaso, Kumasi.

Under the second phase, carried out in 2020, she indicated that existing workshops in those institutions had been rebuilt and expanded, and that cost €6.8 million.

“Again, with our tertiary institutions, we also had Amatrol furnishing workshops and administration blocks. So with these, it is important to get qualified teachers and instructors to teach from the lower level to the highest level,” the deputy minister said.

She said the ministry had also established the Akenten Appiah-Menka University of Skills Training and Entrepreneurial Development (AAMUSTED).

That university, she said, had its workshop well furnished with modern TVET equipment and was offering training and retraining for TVET instructors and professionals and collaborating with industries to ensure that teachers and instructors would have the opportunity of being trained before handling the instruments.

To strengthen the TVET sector as part of the transformation agenda, Ms Twum-Ampofo said, two acts, the Education Regulatory Bodies Act, 2020 (Act 1023) and the Pre-Tertiary Education Act, 2020 (Act 1049), were passed to, among other things, set up the Commission for TVET to engage in a number of activities, including looking for funding for the continuous upgrading of the institutions, developing curricula and collaborating with industries.

The deputy minister said all the collaborations with the country’s development partners came with some component of curricular development and training of instructors.

Some of the retooling equipment. Picture: SAMUEL TEI ADANO

Moreover, Ms Twum-Ampofo said, the government was working hard to ensure the completion of all projects being undertaken and cited the first TVET Centre of Excellence that had been completed at Anyinam in the Eastern Region.

The second one, she said, was located at Pakyi Number Two, which was about 80 per cent complete, with three others at various stages of completion.

The centres of excellence were being done with the support of Messrs De-Lenrezo S.p.A (manufacturer and supplier of TVET solutions) at a cost of €25.7 million for the five facilities.