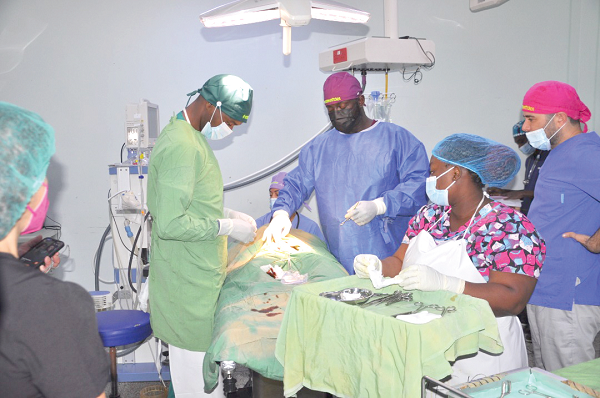 Dr Obeng (2nd from left) and other members of RESTORE carrying out reconstructive surgery on a patient
30.5k Shares

Restore Worldwide Inc. Reconstruction, a not-for-profit organisation, is carrying out a week-long free reconstructive surgery for patients with various forms of deformation in Ho.

RESTORE is the acronym for Restoring Emotional Stability Through Outstanding Reconstructive Efforts.

Out of the figure, 180 were found eligible for surgery while the others were given medication to treat their deformities.

Briefing the Daily Graphic, Dr Obeng said the patients undergoing the reconstructive surgery came from various parts of the country, including the northern part of the country, Greater Accra, Volta and Oti regions.

He said the team spotted deformities on their faces, noses, ears, genitals and other parts of their bodies.


“Some were left deformed through accidents, burns and fractures,” Dr Obeng added.

As of last Tuesday, 51 reconstructive surgeries had been carried out successfully, he said.

Dr Obeng commended the HTH for the, “smooth and excellent” collaboration with RESTORE, saying the exercise would be extended to other health facilities in the future.

Dr Obeng insisted that the health system in Ghana needed to be revamped to curb the trend in which the poor continued to die from treatable cases.

“If the government can provide free senior high school education, why can’t it provide free basic health care?” he queried.

According to him, some of the patients who reported for the exercise at the HTH had waited for four years for free surgery because they did not have money.

He observed that although there was an overwhelming need for reconstructive surgery in developing countries, those types of surgeries were not available due to the lack of trained local physicians.

“The focus of RESTORE is to respond to the plight of these individuals and as part of our mission, we seek, educate and train local physicians and teach techniques to perpetuate our initial work to benefit more people in the years to come,” Dr Obeng said.

In a related development, about 100 patients have benefited from the just-ended Operation Hernia International’s surgeries for hernia at the HTH.

This year, two Belgian consultants who are members of Operation Hernia International joined the surgical team at the HTH to perform the operations on the hernia patients.

The Head of Surgery at HTH, Dr Nelson Affram, said the exercise was smooth.

He said the beneficiaries of the exercise were from not only Ho, but also from Accra and other parts of the country.