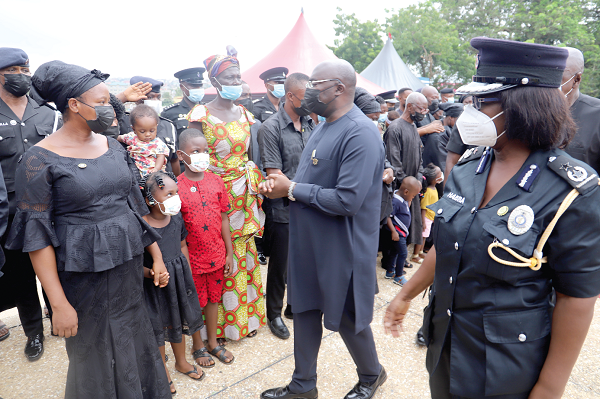 Vice-President Dr. Bawumia consoling some widows and thier children after the ceremony. On his left is DCOP Habiba Twumasi Sarpong, Director-General, Welfare, Ghana Police Service

Eleven police officers who passed on in the line of duty this year were yesterday remembered at a Remembrance Day ceremony held at the precinct of the cenotaph at the Police Training School at Tesano in Accra.

Many of them died through vehicular accidents and targeted shooting incidents.

Eight of them would have their names engraved on the Wall of Honour while the remaining three will be in the Roll of Honour.

The Vice-President, Dr Mahamudu Bawumia, lit the “perpetual flame” to set the stage for the ceremony.

He later signed the remembrance book.

In attendance at the ceremony, which lasted almost an hour, were the Minister for the Interior, Mr Ambrose Dery; the Inspector General of Police (IGP), Dr George Akuffo Dampare; former IGPs, representatives of heads of other security services, traditional rulers, senior police officers and families of the deceased officers.

The Vice-President laid the first wreath for the government and people of Ghana while the IGP laid another for the Police Administration.

Other wreaths were laid by a representative of the bereaved families and the Otublohun Mantse, Nii Duodu Nsaki II, on behalf of the Ga Traditional Authority.

In an exhortation, the Director-General of the Police Department of Religious Affairs, DCOP Very Rev. Father George Arthur, reminded everyone about the inevitability of death and said: “The reality is that we will all exit the world in different circumstances and so no one can escape the reality of death.”

He said the death of a police officer was not only a loss to the family but to the nation as well and asked about measures being instituted to prevent such deaths.

He also questioned the lessons learnt from such “adversarial killings” of police officers and advised those living that life was short and, therefore, they must strive to leave a mark of positive remembrance.

“These officers died as gallant officers and their names will be engraved on the cenotaph.

They have left an indelible mark on the strong walls of the service,” Very Rev. Father Arthur added.

The Remembrance Day had been singled out by the Police Administration to give special recognition to serving police officers who lose their lives while on duty, be it in the country or while on peacekeeping duties.

It is a day to recognise the contributions and the sacrifices made by the officers at their peril.

Once police officers paid the ultimate price in the course of performing their duty, the Police Memorial Day celebrates such heroes and engraves their memories on a permanent monument.

The idea for the observation was conceived in November 24, 2014 but the maiden event took place on a bare floor at the time.

The cenotaph was first used to mark the Remembrance Day for officers who perished in November 2015 and 2016.

The day has been permanently fixed for November 2 to coincide with all Souls Day of the Catholic Calendar.

The Police Administration also uses the occasion to visit families of the bereaved families and offer them some support while church services and muslim prayers are held after the ceremony in honour of the dead.