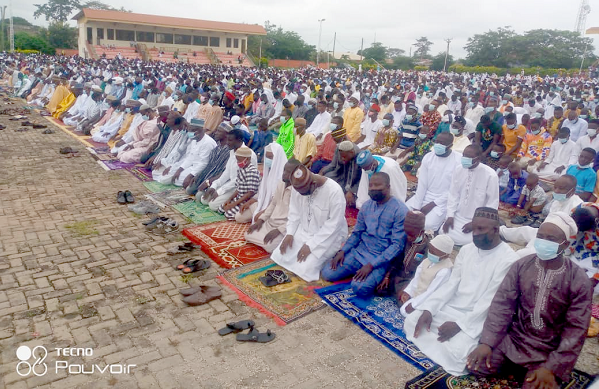 In the various regions, the Chief Imams led congregational prayers and together with political leaders, spoke on the need for the people to keep to the safety protocols of the pandemic while upholding the peace of the nation.

Emmanuel Baah writes from the Central Mosque in Kumasi that scores of Muslims converged to offer prayers to mark Eid-ul-Adha.

“Let’s shame the devil by forgetting our past and forge forward,” he told the gathering.

The Ashanti Regional Minister, Mr Simon Osei Mensah, urged the Muslim community to continue to adhere to the COVID-19 safety protocols, adding that the new Delta variant was real.

Vincent Amenuveve reports that hundreds of Muslims converged on the Bolgatanga Arts and Crafts Village Park for prayers to mark Eid-ul Adha.

The Upper East Regional Chief Imam, Alhaji Adam Yussif, led the prayers and entreated Muslims in the region to reflect on the significance of the celebration.

In a speech read on his behalf, the Regional Minister, Stephen Yakubu, said the government was committed to executing policies and programmes to help develop the country, including the Upper East Region.

The Tema Metropolitan Chief Iman, Adam Abubakari, urged the Muslim youth to desist from negative acts that tarnished the image of the religion and the teachings of Islam, reports Benjamin Xornam Glover.

Speaking to journalists after leading the Eid-ul-Adha prayers at the Tema Sports Stadium, he said Islam enjoined its followers to be tolerant and law abiding.

The Metropolitan Chief Executive for Tema, Mr Felix Mensah Nii Anang-La, urged Muslim faithful in particular and Ghanaians in general to remain faithful and devoted to God, while the Member of Parliament for Tema East, Mr Isaac Ashai Odamtten, said in remembrance of the great sacrifice of Prophet Ibrahim, the Muslim community should continue to sacrifice for one another and seek the well-being of the nation.

Meanwhile David Paa Kwesi Able reports from Adenta in the Greater Accra Region that charity organisation, DirectAid Ghana yesterday offered 300 bulls at the cost of GH¢900,000 in keeping with its tradition of giving to support the celebration of Eid-ul-Adha.

Hundreds of celebrants who trooped to the Mercy Centre head office of the organisation were each handed three kilos of meat.

In Accra alone, DirectAid Ghana said it offered 100 bulls, handing out live bulls in many cases to faith-based organisations and groups, and butchering most.

The remaining bulls were distributed in similar fashion at the organisation's other offices in the Northern, Ashanti and Central regions.

Biiya Mukusah Ali reports that hundreds of Muslims in the Sunyani Municipality converged on the Sunyani Jubilee Park for the Eid-ul-Adha prayers.

They were joined by some government officials and the leadership of the various political parties in the region to pray and give thanks to Allah.

Even though those gathered wore face masks to protect themselves against COVID-19, they could not observe the social distancing protocol due to the sheer numbers.

The Deputy Regional Chief Imam, Alhaji Baba Seidu, who led the prayers, slaughtered a ram to pave the way for the Muslims to do so in their homes after the prayers.

He said the recent upsurge in the number of infections was a source of worry and admonished the Muslim faithful not to engage in acts that could jeopardise their safety.

The Regional Minister, Dr Hafiz Bin Salih, called on the Muslims to pray for peace in the country.

Muslims gathered at the Jubilee Park in Tamale for the Eid-ul-Adha prayers reports Samuel Duodu.

The prayers were led by the Northern Regional Chief Imam, Sheikh Abdul Salaam Ahmed, who prayed for peace and tranquility to continue to prevail in the region and the country as a whole.

The open-air congregational prayers were held for the first time since the outbreak of COVID-19 in March, last year.

The Northern Regional Minister, Alhaji Shani Alhassan Shaibu, urged members of the Muslim community to continue to uphold peace which is one of the tenets of Islam.

The Eastern Regional Chief Imam, Alhaji Yussif Amudani Sulemana, who led the prayers, said Eid-ul-Adha was the most important feast on the Islamic calendar.

He urged all Muslims to remain united as that had been the teachings of Islam.

There were markings on the grounds to ensure that they were well spaced, while handwashing facilities were placed at vantage points for those coming to pray to wash their hands before entering the grounds.

The Zonal Missionary of the Abura Zone of the Ahmadiyya Muslim Mission, Sheikh Ahmed Tahir Mirza, in his speech asked Muslims to understand the importance of sacrifice towards humanity as they celebrate the festival.