Food, it is said, is an issue of national security and that explains the importance successive governments have attached to the agricultural sector.

In recent times, however, high prices of food items have been of major concern for most Ghanaians. Indeed, the national inflation is said to be driven by the agricultural sector, whether downwards or upwards.

From 2017 to 2020, the agricultural sector contributed to the lowering of inflation in the country but currently the reversal is the case, with the agric sector influencing astronomical rise in the inflation figures of over 30 per cent.

With the funds the government has invested in the sector over the last five years to make it the driver of the economy, the situation has to be improved on.

For instance, available data indicates that a total of over GH¢2.0 billion was spent on subsidised fertiliser and improved seeds under the government's flagship programme, Planting for Food and Jobs (PFJ) between 2017 and 2021.

The value of the production over the period under review stood at almost GH¢50 billion from a total production output of 14,973,000 metric tonnes.

However, the high price of food items in recent times has made some question the real success of the flagship programme.

Many people equate the success of the PFJ to the availability of food on the markets at low prices.

In the absence of that, growth in the sector means nothing to the average Ghanaian who goes to the market to buy an 'olonka' (a measure) of maize to prepare kenkey or banku.

Ordinarily, that is a genuine concern, but the dynamics in agribusiness do not support the equation of high food price being a yardstick to pronounce failure of the PFJ.

In the April 4, 2022 issue of the Daily Graphic, an agricultural economist and a senior research analyst at S&P Global, Dr Kwadjo Ahodo, explained the price-taker dynamics of the PFJ in relation to food produced and the pricing.

The policy was launched in April 2017 and according to the Food and Agriculture Organisation Corporate Statistical Data (FAOSTAT), Ghana's production of crops such as maize, plantain, cassava, rice (both paddy and milled) and yam increased between 2017 and 2020, compared to the previous years (see the crop production charts below).

These crops, being mainly annual crops (although plantain takes about a 12-month period), contributed to the increase in crop production between 2017 and 2020, under the policy.

In responding to the question; how come there are increases in crop production but food crop prices are increasing? Dr Ahodo explained that it is all because of the increase in farm-related costs, commensurate increase in food crop demand and the fact that farmers are free to sell to any buyer willing to offer the highest possible price.

As price-takers, farmers do not have control over the prices of risk-reducing inputs like fertilisers and agro-chemicals. Although these inputs are subsidised under the PFJ policy, increase in the prices of these inputs still translates into increased farm costs, since the share of price paid by farmers also increase. Guess who pays for the increased farm cost. The consumer!

Data from the Statistical Service shows a phenomenal growth of the agricultural sector over the last five years. 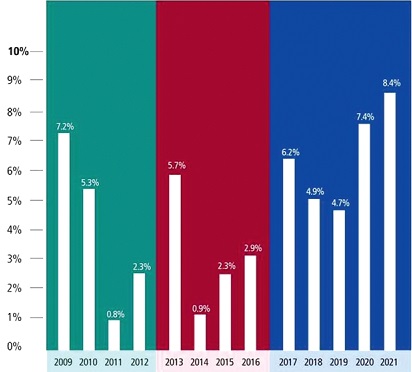 Indeed, Dr Ahodo identified that the farmers are free to sell their farm items to the highest offerer, and therefore, the government does not have control of that. However, there are ways government can influence the pricing.

This is because during a tour of some of the farming areas by the Minister of Food and Agriculture, it was realised that though the prices of food was relatively low at the producing areas, the same could not be said in the urban market centres.

After the tour, a stakeholder meeting was convened under the chairmanship of the Senior Minister, Yaw Osafo-Maafo, to brainstorm the rising food prices with the aim to finding solutions to the issue.

One of the takeaways was the high fares the haulage drivers charge in carting food to the urban centres from the producing areas.

To mitigate the impact of middle men on the prices of food items, the government must continue to offer incentives such as subsidised fertiliser, improved seeds to the farmers, as has been done over the last five years, as well as fuel coupons to dedicated haulage drivers through identified market queens to reduce the cost of carting the food items.

In Sunyani last month, Dr Akoto hinted the possibility of offering coupons in that respect. This is surely a great idea.

It is expected that such a move will affect the prices significantly and subsequently reduce the harsh impact on the consumers.

Otherwise, we may have all the nice statistics indicating the growth of the agric sector, the impact of which would not be felt by Ghanaians, and the seeming failure of the PFJ policy.