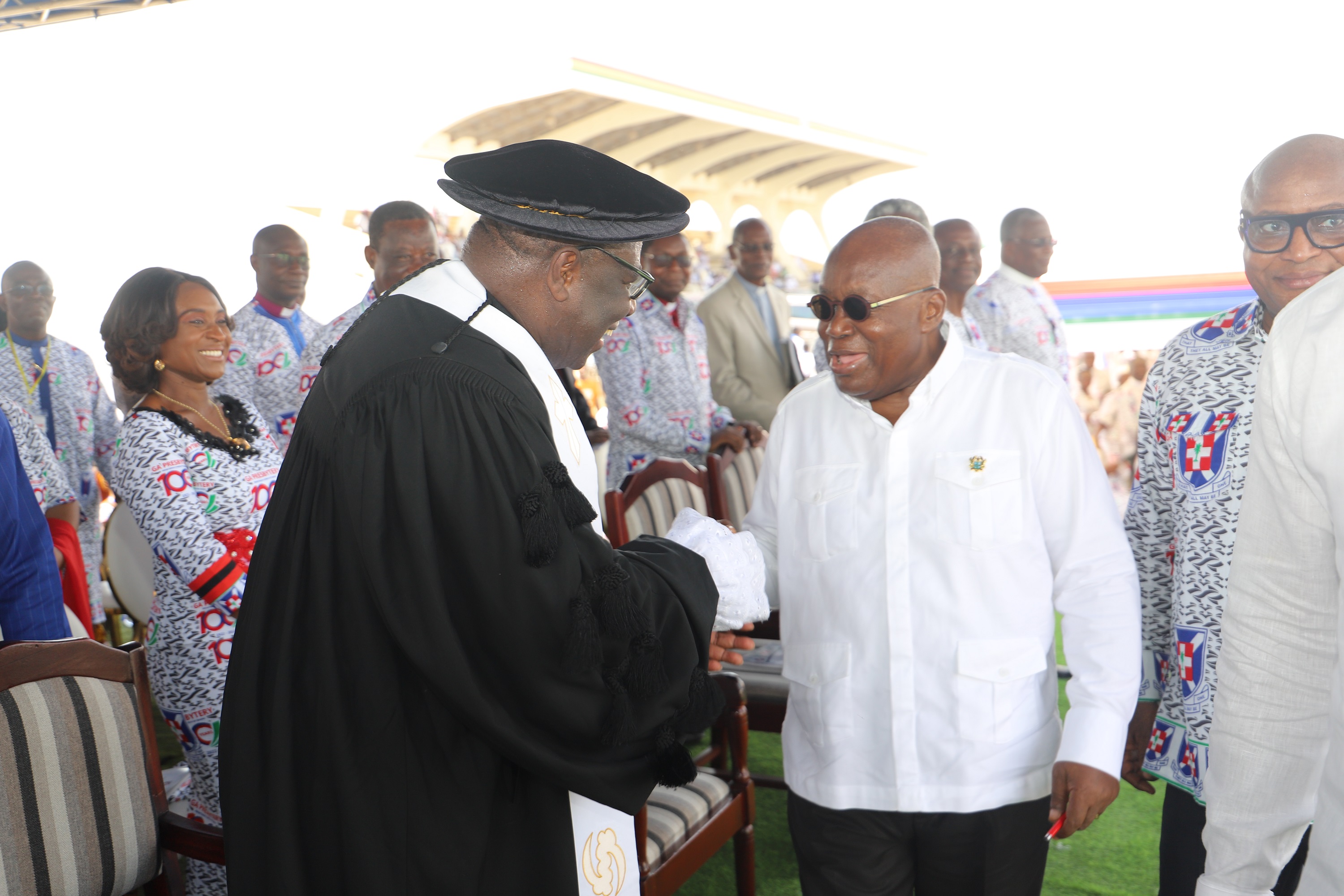 President Nana Addo Dankwa Akufo-Addo has appealed to manufacturers, traders and transport operators who increased the prices of goods and services at the height of the cedis’ depreciation to reduce them now that the cedi is regaining its strength.

He urged Ghanaians to join the clarion call for price reduction, which he said was not only fair but also a just one, so that Ghanaians could have a more pleasant Christmas.

The President made the call at a thanksgiving service to mark the year-long celebration of the 100th anniversary of the Ga Presbytery of the Presbyterian Church of Ghana (PCG) at the Independence Square in Accra on Sunday.

President Akufo-Addo, who traced the role of both his maternal and paternal grandparents in the formation and growth of the Presbyterian Church in the country, joined in cutting the centenary cake and also donated GHc100,000 to the church.

The anniversary was on the theme: “Grateful for our heritage: Forging ahead in unity and faith.”

The congregation, dressed in their centenary attire, filled both the stands and the inner perimeter of the iconic square.

Touching on the policies that had led to the gains by the cedi, the President said the feat had not happened by chance but through the implementation of deliberate policies by the government, in collaboration with the Bank of Ghana (BoG).

These included cedi liquidity tightening measures, resulting in the offloading of forex as a store of value by speculators, the improvement of forex inflows from remittances and the mining sector and the reaching of a staff level agreement with the International Monetary Fund (IMF) for a $3-billion package.

He explained that all those had combined bring the cedi to an improved position and gave an assurance that the government would continue to work hard to maintain and sustain the gains made.

He announced that in the weeks ahead, the BoG would continue with the purchase of forex from the mining and the oil sectors to enhance liquidity supply to the market, continue with a single unified forex forward auction and some targeted bilateral support to critical imports, as well as the implementation of the gold-for-oil swap transaction which would significantly remove forex pressures on the cedi.

Referring to the theme of the anniversary, the President said it reminded him of the difficult economic period and the reason Christians should hold on to their faith and never stop believing in the power and the grace of the Almighty God.

He touched on the challenges the world had been through from 2020 till now, including high freight charges, high fuel costs, high food prices and steep inflationary hikes, adding that the depreciation of the cedi reached record lows in November, making the jury out on his government.

“At the height of our challenges, there were some who doubted the capability and resolve of my government and I to return our nation back onto the path of progress and prosperity and lift us out of our current problems,” he added.

He noted that in those dark moments, he recalled St Matthew in Chapter 19 verse 26: “Jesus looked at them and said to them, with men this is impossible, but with God, all things are possible”.

He said with appropriate policies, determination and hard work, the government was turning things around, but cautioned that the country was not yet out of the woods.

“However, today, the cedi is rapidly appreciating against the US dollar and all major currencies, making up for its losses, and the prices of petroleum products are reducing at the pump,” he said.

President Akufo-Addo said he was aware that times were hard, which was affecting all, but gave an assurance that the government would not shirk its
responsibility to take the hard decisions which hard times demanded.

That, he said, might be painful, just like injections, but must be taken “if we are to be well again and get our economy back in a good place. The policies and programmes we are implementing are meant to address the challenges”.

The President, who was baptized Presbyterian, said the word ‘Presbyterian’ evoked certain images in the mind, such as strict disciplinarian,
dislike of ostentation, hardworking, straight-talking, virtues of fortitude, temperance, prudence and justice.

The Moderator of the General Assembly of the PCG, Rt Rev. Prof. Joseph Obiri Yeboah Mante, said the recent economic turmoil that engulfed the country made the PCG, the Pentecost Church and the Methodist Church resort to fasting and prayers to seek the intervention of the Almighty God.

He noted that although he was not an economist, he had confidence in the 2023 budget statement because he realised that it had the propensity to turn things around, saying “no wonder it has started” and gave glory to God.

Touching on the appreciation of the Ghana cedi, he quoted Micah 7:8: “Rejoice not against me, O mine enemy: when I fall, I shall arise; when I sit in darkness, the Lord shall be a light unto me.”

The Moderator said that was the Bible quotation of the Ghana cedi against the major international currencies,