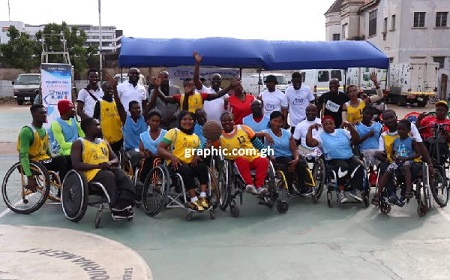 The disability community has expressed concern about the “failure by government” to implement policies that will promote their welfare as required by the Convention on the Rights of Persons with Disabilities (CRPD).

Ten years after the country ratified the CRPD, the disability movement, led by the Ghana Federation of Disability Organisations (GFD), said it was worrying that persons with disability (PWDs) continued to suffer various forms of discrimination in accessing public services.

A report by a technical committee, set up by the GFD to review the government’s commitment to disability rights, showed that the country was yet to amend its domestic legislations in line with the CRPD.

The GFD indicated that although there was a process to amend the domestic legislations to align them with the provisions of the CRPD, the progress was rather slow because of “low political will and prioritisation of the process”.

The CRPD is an international human rights treaty led by the United Nations (UN) to protect and promote the rights and dignity of PWDs.

In March 2007, Ghana signed onto the convention and subsequently ratified it in July 2012.

By that ratification, the country was expected to implement the provisions of the convention to ensure that PWDs were accorded equal rights without any form of discrimination.

Ghana submitted its first report to the CRPD committee in 2018, outlining measures that had been taken to implement the convention and to ensure that the rights of PWDs were upheld.

The government report outlined the legislative, judicial, policy institutional frameworks and other measures that had been put in place to promote, protect and ensure the full and equal enjoyment of all human rights and fundamental freedoms by all PWDs.

Following the submission of the state report, the disability movement in Ghana, led by the GFD, also prepared and submitted a shadow report to the CRPD committee of experts, drawing attention to critical issues that the state report overlooked.

“This is an indication that not much has been done regarding modifying laws as required by Article 4(1)(b) of the convention which enjoins government parties to “take all appropriate measures, including legislation, to modify or abolish existing laws, regulations, customs and practices that constitute discrimination against persons with disabilities,” the committee said.

It emphasised that there were various legislations that still used derogatory terms such as “unsound mind”, “idiot”, “insane”, “imbecile” “lunatic” and “mental derangement”, a development they described as “degrading and dehumanising” to PWDs.

Touching on the issue of accessibility, the GFD committee said there was no conscious effort on the part of the government to implement the various provisions on accessibility and access to information, as well as public goods and services as provided for under Articles 9, 19, 20 and 21 of the Convention.

The committee noted that despite the adoption of the national accessibility standards and the national building code, provisions in those documents had not been effectively implemented.

“This has made accessibility to basic facilities such as education, health, and legal systems either difficult or impossible,” the report said.

Again, the report revealed that there was no meaningful attempt to better protect the rights of women and children with disabilities taking into cognisance their peculiarities as provided for under Articles 6, 7, 15, 16 and 23 of the Convention.

Aside from this, the report said it was worrying that women with disabilities continued to face violence and abuse both at the family and community level.