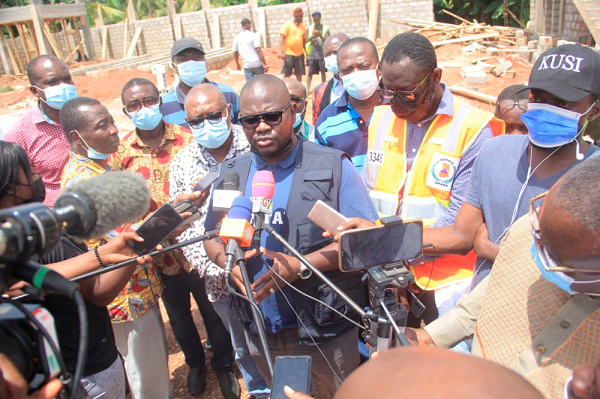 • Mr Francis Asenso-Boakye granting interview to the media in Kumasi after his tour to some flooded areas. Follow @Graphicgh

The Minister of Works and Housing, Mr Francis Asenso-Boakye, has ordered the Kumasi city authorities to pull down over 300 structures which identified to be on watercourses.

That, the Minister said, would help avert further flooding in the future, with the onset of the rainy season.

Mr Asenso-Boakye gave the advice last Monday when he visited some areas in Kumasi that were affected by the heavy rains recorded last week and which left two people dead in the metropolis and rendered many others homeless.

He said it was important to take the difficult decisions now to avert disaster in the future, saying the incidents of flooding being recorded in recent times in Kumasi could be attributed to building on watercourses.

According to Mr Asenso-Boakye, managing flood was not the responsibility of only the Ministry but also the metropolitan, municipal and district assemblies (MMDAs), as well as their chief executives, who had been mandated to manage flood at the local level and help solve the perennial floods across the country.

He explained that the pulling down of illegal structures was the responsibility of MMDCEs, since they were in charge of the planning of the city, as affirmed by the  Local Government Act.

He said the issuance of building and development permits was also the core mandate of the MMDAs, and that any time regulations with regard to structures and construction were breached, it was the responsibility of the assemblies to make sure that those buildings were pulled down.

At Atafoa, where a developer was putting up a washing bay and adjoining stores along a watercourse, the Minister ordered the KMA to pull the structure down with immediate effect.

He wondered why city authorities would sit aloof and allow residents to put up structures on watercourses, a situation he described as not only unlawful but also detrimental to the development of the city.

Mr Asenso-Boakye said he had gathered that the developer pulled a gun on the authorities when they confronted him (developer) to stop work, describing that incident as criminal.

He called on the KMA to report the incident to the police for action to be taken against the developer to deter others from going contrary to the law.

The Works and Housing Minister also singled out the indiscriminate  disposal of solid waste, especially into drains, as the main cause of the flooding and advised residents to desist from that unlawful practice, as it did pose a danger to their health and could lead to the outbreak of cholera.

Mr Asenso-Boakye, said when the team of engineers visited the area soon after it got flooded,  it observed that residents had dumped all kinds of waste into the drains, which caused them to get choked.

He said it took community action, led by the Assembly Member for the area, Mr Kwabena Boateng, and his team, who went into the tunnel and pulled out debris to allow free flow of water through the drains.

"The fact is that we are the cause of our woes," he reiterated, saying it was about time residents took responsibility, instead of blaming officialdom.

"Nana Akufo-Addo has spent GH¢450 million to fight flooding in this country", he said, saying all that investment would go to waste if the citizenry did things the same old way.