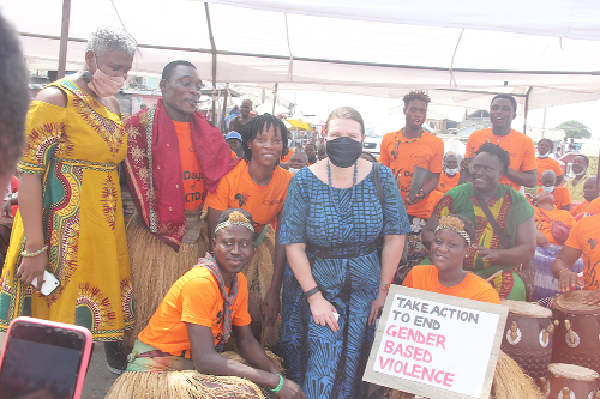 The Canadian High Commissioner to Ghana, Mrs Kati Csaba, has called for the prosecution of perpetrators of sexual and gender-based violence (SGBV).

She said that instead of shaming victims of gender violence, focus should be on encouraging and supporting them and bringing the offenders to book. She further explained that the majority of SGBV cases recorded in the country were perpetrated by people close to the victims, which made it very difficult for victims to speak out and seek redress.

Mrs Csaba made the call at the climax of "16 Days of Activism against Gender based Violence" campaign by the High Commission of Canada in partnership with Hope for Africa.

“We know that women and girls are more vulnerable than men and boys to social, physical, sexual, psychological and economic abuse and harassment irrespective of their age and status in society,” she said.

The Country Director for Hope for Africa, Mrs Vincentia Koranteng-Asante, said gender-based violence needed to be eliminated as it had become the most pervasive human rights violated in the world today.

She further revealed that despite the efforts to curb the issue both nationally and globally, there were still cases of violence in the country, especially against women.

Mrs Koranteng-Asante said in a data report from the Greater Accra Regional office of the Domestic Violence and Victims Support Unit (DOVVSU) about 31.9 per cent of Ghanaian women faced at least one form of domestic violence as of August 2020.

That, she said, was proof enough that SGBV needed to be eliminated.

"There is the need for all of us to redouble our efforts to eliminate and reverse the trend," she added.

She added that the campaign, dubbed “Make SGBV a taboo”, started on November 25 this year and was targeted at educating the people of Jamestown on the need to protect and respect the right of women and girls against any form of violence.

She added that the campaign included visitation to schools, market areas, lorry parks and other key hotspots in the Jamestown vicinity to advocate creating livelihood opportunities for women to “enable them to stem their overdependence on men for very basic necessities”.

As part of the awareness campaign, separate sessions were held for both men and women to identify and find possible solutions to challenges they faced in the home and in the community.

Some issues were identified as contributing to violence and included misuse of money and disrespect on the part of women, impatience and the perception that beating women would serve as a deterrent to other women to keep them from misbehaving.

It was also identified that women who reported domestic violence cases to the police stations were asked to pay huge sums of money before the case was taken up or had the cases dropped because the offenders had some back up from prominent people in the society.