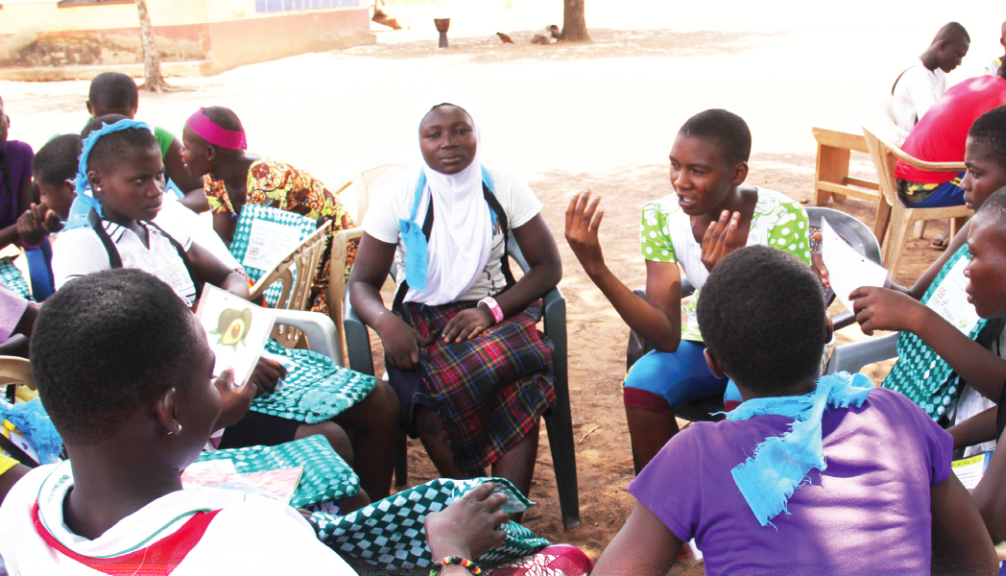 Some of the project beneficiaries holding discussions
30.5k Shares

In January 2014, the National Population Council (NPC) and partners began the implementation of a four-year (2014-2017) Ghana Adolescent Reproductive Health (GHARH) project aimed at contributing to improvement of reproductive health knowledge and behaviour of adolescents.

The United Kingdom (UK) government-funded programme, which was implemented by the Palladium Group, sought to strengthen local capacity to manage, coordinate, implement and monitor a multi-functional adolescent reproductive health programme with the objective of  generating evidence to support the scale-up of cost-effective adolescent reproductive health (ARH) interventions.

GHARH, therefore, provided support to government agencies at the national and regional levels to implement activities in schools, communities and within the health system, including strengthening the capacities of the principal government partners.

The project was initially implemented in the Brong Ahafo Region, covering all the 27 districts in the region with the focus on improving the provision, knowledge and awareness of Adolescent Sexual Reproductive Health (ASRH) services and provide capacity to deliver adolescent-friendly SRH services; increasing availability of family planning commodities and strengthening evidence based on factors affecting uptake of ASRH and family planning.

The project was extended to the Ashanti Region in September 2016 to scale up project activities in the country and also to facilitate sustainability.

It was implemented in the Atwima Kwawoma, Asokore Mampong and Kumasi Metropolitan Assembly (KMA) districts for nine months by the Ghana Health Service, Ghana Education Service and some selected non-governmental organisations (NGOs).

To end the project, the partners held a one-day meeting in Kumasi to discuss achievements, lessons learned and most importantly, strategise to sustain activities of the project.

The meeting was attended by representatives from government institutions and agencies, development partners, NGOs, local authorities and youth organisations who work in the area of adolescent reproductive health programming in Ghana.

Mr David Logan, the Palladium Team Leader informed the meeting that the GHARH Project had been impactful.

Furthermore, 803 adolescent service platforms were established and 205,000 adolescents provided with ASRH services among others. Mr Logan stated that the multi-sectoral nature of GHARH highlighted the importance of intersectoral coordination and value of working across sectors.

The establishment of school health clubs have also deepened the understanding of ASRH issues among in-school adolescents, while the success of the You Only Live Once (YOLO) TV drama serial, has reinforced the importance of youth involvement and appropriate, targeted messaging in addressing their own SRH needs.

“The series has been well received, contributing to greater awareness of ASRH issues and uptake of services. There is now need to link YOLO drama serial with private sector initiatives to expand viewership,” he added.

Going forward, Mr Logan advised that partners would need to work assiduously in the area of service delivery, community involvement and demand creation for future programming and sustainability.

In her statement at the meeting, Dr Leticia Adelaide Appiah, Executive Director of NPC, said the NPC specifically implemented programmes under the key operational areas of coordination, advocacy, capacity building and monitoring.

“During the lifespan of the project, the NPC, through collaboration with its partners from various sectors in adolescent reproductive health programming, organised key meetings and conferences,” she said.

The queenmother of Foase, Nana Akosua Gyedua, said many young people in the project regions were now informed about their sexuality and now confidently mentor others.

She noted, however, that ASRH services were currently urban-focused and called for a review of programming in this area.

A consultant, Prof.  Kofi Awusabo-Asare of the Department of Population and Health, University of Cape Coast, and Dr Patrick Aboagye, Director, Family Planning Division of the Ghana Health Service, in a panel discussion, raised many critical issues regarding adolescent sexual health.