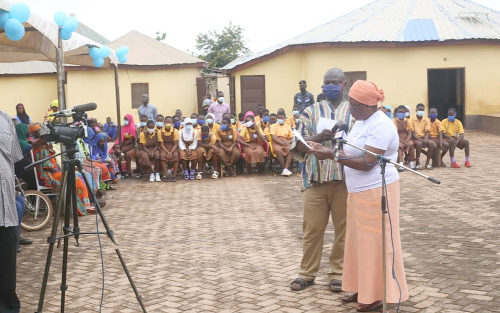 The SOS Children's Villages Ghana has kick-started a project in the Sagnarigu Municipality in the Northern Region to help address the issue of gender-based violence, including Child, Early and Forced Marriage (CEFM).

The project is also aimed at strengthening the capacity of women for improved income.

Dubbed "Sagnarigu Women's Empowerment Project (SWEP)", the project will give men, women and children equal opportunities in exercising their rights, accessing resources and participating in making decision for their welfare.

The initiative will reach out to a total of 11,500 people directly and indirectly within the municipality in 20 schools and 10 communities.

It is being funded by the French Embassy in Accra, Ghana, under its French Solidarity Programme christened, "Strengthening Professional Skills of Civil Society Organisations in Ghana (PISCCA)".

Speaking at the launch of the project at the forecourt of the Palace of the Paramount Chief of Sagnarigu, the Programme Director, SOS Children's Village, Tamale, Ms Benedicta Pealore, said an assessment made by her organisation revealed that women in the Sagnarigu Municipality were the most disadvantaged group.

She said the project was, therefore, designed to focus on interventions that fostered economic empowerment as part of capacity building.

On the issue of gender-based violence, Ms Pealore said SOS Children's Villages Ghana would work to strengthen 30 community-based structures such as community schools, community based organisations (CBOs), traditional/religious leaders, women and youth groups to understand the effects of gender-based violence on women and their communities and to equip them to respond to associated issues that might arise.

She said 1,000 boys and girls would also be empowered to prevent and report CEFM incidents and awareness on gender-based violence.

In the area of strengthening the capacity of women and girls for improved income, she said 20 women and girls would be provided with market-relevant technical/vocational skills.

In addition, she said 300 women and girls would receive business development training which included digital, financial and entrepreneurial skills while 20 Village Savings and Loans Associations (VSLAs) would be established and strengthened for improved financial access and stronger social networks.

The Gushei-Na, Alhaji Imoro Alhassan, who launched the project on behalf of the Paramount Chief of Sagnarigu, Yakubu Abdulai, pledged the support of the traditional council to ensure the successful implementation of the project that sought to improve on the wellbeing of the people in the area.

The Coordinating Director of the Sagnarigu Municipal Assembly, Mr Al-Hassan Ziblim Alhassan, on behalf of the assembly was hopeful that the project would complement the efforts of the assembly in ensuring total development of the municipality.

The Assembly member for the Sagnarigu Electoral Area, Mr Issah Baba, thanked SOS Villages Ghana for choosing Sagnarigu for the project and also pledged their support to ensure the project achieved its objectives.