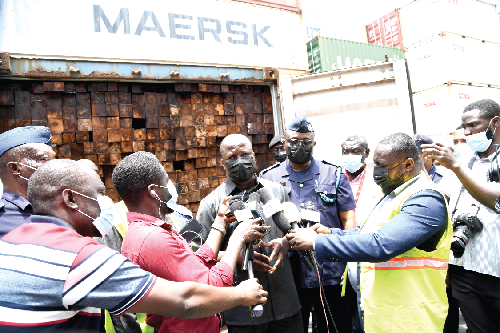 The Minister of Lands and Natural Resources, Mr Samuel Abu Jinapor, has asked the National Intelligence Bureau (NIB) to conduct a full-scale investigation into the cartel behind the illegal trade in rosewood in the country.

The minister stressed that the investigation should be "all-encompassing, comprehensive, far-reaching" and targeted at unravelling the mode of operation of the kingpins, identify their facilitators and the possible ways of cracking down on their activities.

The charge followed the confiscation of 13 containers of rosewood that were imported from Nigeria into the country for re-export to overseas destinations.

The logs were impounded on August 24 this year through a collaboration among state agencies, including the NIB, National Security, the Forestry Commission and the Customs Division of the Ghana Revenue Authority (GRA).

Documentation on the 20-cubic-metre containers showed that a local firm, FELISCO-SUN Company Limited, was behind the importation of the endangered tree species.

The minister, who visited the Overseas Commercial Ghana Limited at the Tema Port enclave yesterday to inspect the seized rosewood, stressed that the government would go all out to weed out criminal elements trying to bring Ghana's image into disrepute.

He was joined on the inspection tour by officials of the NIB, Forestry Commission, GRA and National Security.

"I have officially written to the Minister of National Security to help constitute a comprehensive, detailed and far-reaching investigation into the cartel behind the illegal rosewood trade.

“We want the investigation to be wide, and I’m confident that the national security architecture will diligently unravel the circumstances behind the illegal trade in the banned rosewood trade," he said.

Mr Jinapor added that as part of measures to discourage the illegal rosewood trade, the ministry would begin discussions with the ministries of the Interior and Transport for the confiscation of trucks used in conveying the contraband goods.

He said the current system where trucks impounded for carting rosewood were given back to their owners "for paltry fines" would no longer be countenanced.

The minister said the seized rosewood consignment would be put to good use in the national interest.

The wood can also be used for furniture and other products for schools and other state institutions," he said.

Mr Jinapor commended the GRA, Forestry Commission, managers of the Tema Port and other stakeholders who helped to track down the rosewood.

The minister said the illegal trade in rosewood was particularly worrying because it put Ghana in bad light on the global stage since the country had signed the Convention on International Trade in Endangered Species of Wild Fauna and Flora (CITES), which barred trade in endangered species.