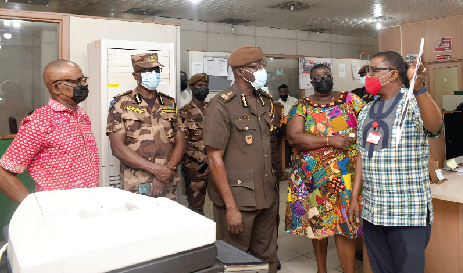 This has become necessary because spaces for training are not available in some prisons, while most of the workshops have been converted to accommodation for inmates.

Besides, the management of the service believes that the government alone cannot address all the challenges in the country’s prisons, for which reason private sector collaboration is necessary.

The acting Director-General of the service, Mr. Isaac Kofi Egyir, who made this known when he paid a courtesy call on the Editor of the Daily Graphic, Mr. Kobby Asmah, in his office in Accra last Friday, said the industrial complex, to be sited outside the main prisons, would be a win-win affair.

Accompanied by some management members of the service, including the Director, Operations, Mr. Samuel Akolbire, and the Head of Public Relations, Chief Supt Courage Atsem, Mr. Egyir said the visit was part of efforts by the leadership of the service to engage its major stakeholders to enhance the work of the service.

Mr. Egyir said budgetary constraints, overcrowding and inadequate workshops to train inmates were major problems that needed to be addressed.

“The government is doing so much, but we all know that it has so many competing demands for the national cake. So we have relied very much on agriculture. Together with the Church of Pentecost, we are establishing five camp prisons preoccupied with agriculture to augment what we are doing,” he said.

He said for 10 years now daily feeding grant per inmate had remained GH¢1.80 and the service had relied on agriculture to supplement government efforts.

“Representations were made to the government recently and it is reviewing the feeding grant,” he added.

Detailing some of the successes chalked up by the service in the face of the challenges, Mr. Egyir said a second batch of 58 prisoners had been enrolled in tertiary programmes at the College of Distance Education of the University of Cape Coast.

He said the programme was being run in collaboration with the Plan Volta Foundation, a non-for-profit organisation.

Touching on the COVID-19 in the prisons, Mr. Egyir noted that Ghana had been recognised as one of the two countries in Africa that did not record an outbreak of the disease in prisons.

For that, he said, he had received a Humanitarian Global Award.

Welcoming the acting Director-General of Prisons, Mr. Asmah noted that notwithstanding the few resources available to the service, it was working hard to overcome the challenges.

He said it would be a disservice to the nation for anyone to close his or her eyes to the challenges .

“We at Graphic can assure you that our doors are always open, and in partnership we will tell your success stories; and through that we believe society can understand your needs and support you, accordingly,” he said.

Mr. Asmah said the prison must not be a place where people went and came back more hardened.

“It’s a reformation centre offering reformational services, but if the resources are not as expected, then obviously the service will not meet its target,” he said.

He said the same way that the success stories of the service had been told, “so also your challenges should not be swept under the carpet”.

Present at the meeting were the Foreign Editor of the Daily Graphic, Ms. Mary Mensah, and a Deputy News Editor, Mr. Kwame Asare Boadu.