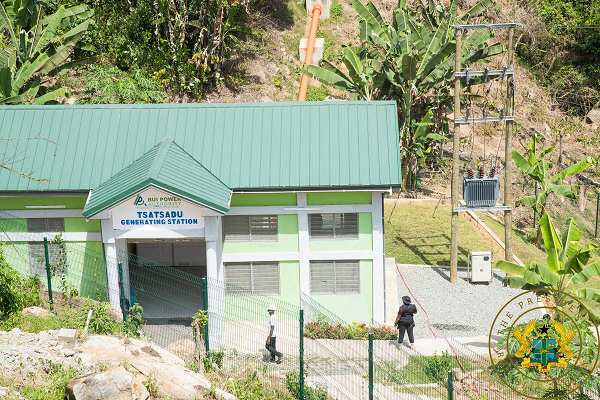 The project, which was designed, developed and constructed by engineers of the Bui Power Authority (BPA), was funded through the internally-generated funds of the authority.

Addressing a durbar of chiefs and people from the area on top of the Tsatsadu Water Falls, President expressed delight that the project, which was one of the 22 sites identified during Kufuor’s administration as potential energy generation points, had seen the light of day.

President Akufo-Addo said the project would be used as a research site for the development of other hydro projects in the country and commended the engineers for preserving the environment, adding "nothing has been destroyed in making this project".

He commended the chiefs and people of the area for maintaining peace and unity to the extent that these days people hardly hear of the protracted Nkonya-Alavanyo land dispute.

President Akufo-Addo traced the origin of the project to 2005, when the government of President John Agyekum Kufuor, entered into a Memorandum of Understanding with the United Nations Industrial Development Organisation (UNIDO) and the International Network on Small Hydro Power of China (IN-SHP) to undertake studies towards the development of Small Hydro Power potentials in the country.

He said they identified 22 of such sites, but the Mills-Mahama Administration abandoned them when they assumed the reins of power.

The project was initially designed as a 30kW stand-alone system, but was redesigned and upgraded to a 45kW grid-connection system based on the outcome of the additional studies.

The 45kW Tsatsadu micro hydro generating station is situated on the Tsatsadu Waterfalls, a run-of-river scheme, which does not require the formation of a reservoir to operate.

It consists of a concrete diversion weir (retaining wall), an intake structure, diversion channel, a fore bay, steel penstock (a pipe for conveying water to a hydroelectric station), a powerhouse and a transmission line, which ties the electricity generated into a local distribution grid.

The weir diverts part of the river flow through an intake channel into the diversion channel.

The Paramount Chief of Alavanyo, Togbuiga Tsedze Atakora, commended the President for the many development projects in the area and the country which he said was impacting positively on the lives of people.

He said the people were particularly happy that through his leadership and the support of other institutions, the recurring problem of Nkonya-Alavanyo conflict had ceased.

"Mr. President, the only two things God deprived me of are dancing and singing. If I had a beautiful voice and good dancing skills I would have sung and danced to appreciate you," Togbuiga Atakora said.