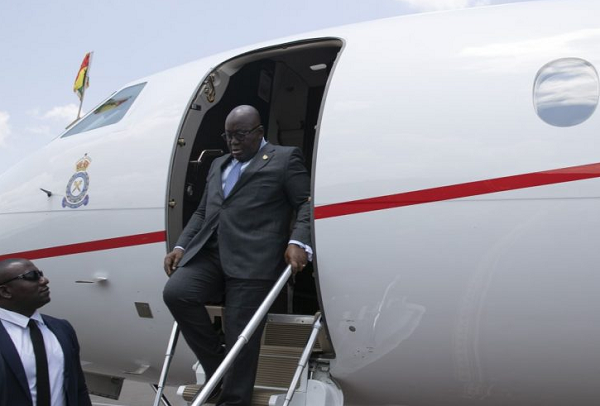 He and a six-member team arrived in Accra at 8 a.m. on Sunday aboard a commercial flight.

The Information Minister designate, Mr Kojo Oppong Nkrumah, confirmed this at a media briefing to address some major issues, including the visit by Mrs Melania Trump to Ghana, the creation of new regions and the free SHS policy.

“I can confirm to you that there was a challenge with the presidential jet. About 20 minutes into the flight from Washington to Accra, the aircraft developed a challenge with one of its engines. The pilot informed the passengers, including the President, accordingly,” he explained.

Mr Oppong Nkrumah said a decision was taken to land the aircraft at the Washington Dulles Airport, but they first required about one hour of flight to dispose of some of the fuel that was on board.

He further explained that subsequently, the flight landed safely at the Dulles Airport in Washington DC and the President and his delegation got on a commercial flight, South African Airways, and arrived in Accra at 8 a.m. on Sunday.

Answering a question on whether the government would purchase a new presidential jet, since the aircraft had, over the years, faced similar challenges, he said: “It’s not a matter on his (President’s) itinerary to buy a new jet,” indicating that it was an incident that happened.

Addressing former President John Dramani Mahama’s comments about the free SHS policy over the weekend, Mr Oppong Nkrumah said the government was not surprised because the former President had always been against the policy.

Mr Oppong Nkrumah pointed out that Mr Mahama had never been in favour of free SHS policy and campaigned against it even when he was the sitting President.

But the minister designate said the free SHS policy had brought enormous benefits to parents and students, explaining that about 500,000 students who would otherwise not have continued their education had, through the free SHS policy, had access to education.

“We do not share the view that it is senseless to put these extra 500,000 students through free SHS in this first term of the Akufo-Addo government.

“President Akufo-Addo has already mentioned that that claim to review the programme if Mr Mahama were ever to regain power is a veiled threat to collapse the programme,” he added.

Touching on the creation of new regions, he reiterated that it “was motivated by petitions sent to the President from some regions and not on tribal lines”.

He explained that the President was thus bound, under Article 5 of the Constitution, to act on those petitions.

“The President thus set up the constitutionally mandated Commission of Inquiry, which, over an eight-month period, investigated those petitions and later validated the claims and requests from the petitioning communities,” he said.

He advised people to stay away from the debate about tribalism concerning the creation of the regions, saying: “If you have any substantive matter, you can either go to court or participate and encourage people to vote ‘No’ at the ballot.”

“The visit is part of a trip that she is organising across a number of African countries, including Kenya, Malawi, Egypt and Ghana. In Ghana, she is focusing on children’s welfare and development, primarily because our First Lady is also doing a lot of work in maternal health care,” he explained.

He said Mrs Trump would be joined by the First Lady, Mrs Rebecca Akufo-Addo, to visit the Children’s Block of the Ridge Hospital to observe some of the effort made by the government to improve child health care and explore ways in which her office could also partner the various agencies in Ghana focusing on improving child welfare and development.

He said on the second day, Mrs Trump would visit the Cape Coast Castle, after she had paid a courtesy call on the Omanhen of the Oguaa Traditional Area at his palace in Cape Coast.

“All in all, her visit is expected to assist us to boost tourism and Ghana-US ties,” he said.