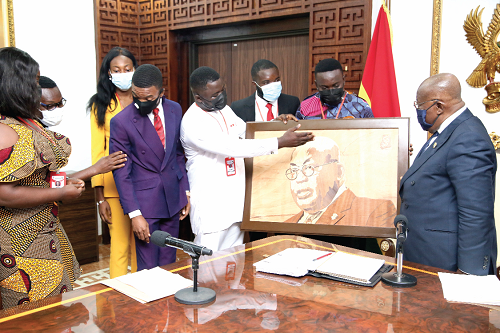 President Nana Addo Dankwa Akufo-Addo has welcomed the suspension of the industrial action by the University Teachers Association of Ghana (UTAG) and expressed the hope that a strong binding agreement will be reached by the negotiating parties.

“There is a road map that has been established and hopefully both parties will make sure that this road map is carefully implemented.

“It is in the interest of all of us that there is no disruption of academic work; the teachers have the wherewithal to undertake and discharge their obligations,” he added.

President Akufo-Addo was speaking during a courtesy call on him by the leadership of the National Union of Ghana Students (NUGS) at the Jubilee House in Accra yesterday.

Led by the President of NUGS, Mr Emmanuel Yiadom-Boakye, the students put issues affecting them before the President.

They included concerns about astronomical increases in hostel fees at the various universities and delay in the acquisition of visas to the United States by some students.

According to the President, university teachers played a significant role in shaping the future of the youth of the country.

He, therefore, called for an amicable resolution of the impasse to pave the way for an uninterrupted academic calendar of universities in the interest of all.

President Akufo-Addo further gave the assurance that the issues raised by the students would be given the needed attention.

Mr Yiadom-Boakye commended the government whose representatives included the Ministers of Education, and Employment and Labour Relations, who he said managed to get UTAG to the negotiating table leading to the suspension of the strike action.

He, however, appealed to both parties not to take entrenched positions in order that the negotiation processes were not prolonged or delayed.

On the increases in hostel fees, Mr Yiadom-Boakye said their investigations had revealed that there was a deliberate attempt by some university management to create artificial hostel shortages on campuses.

He urged management of the universities to be flexible during the negotiations for the build, operate and transfer policy with hostel operators while entreating the government to build more hostels on the various campuses to deal with the accommodation challenge.