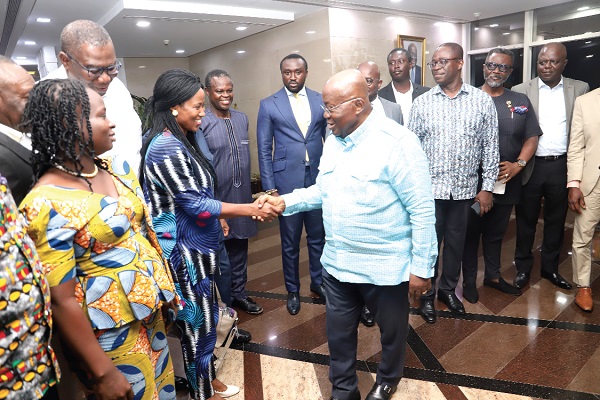 President Akufo-Addo exchanging pleasantries with some of the trainees at the Jubilee House. Picture: SAMUEL TEI ADANO
30.5k Shares

President Nana Addo Dankwa Akufo-Addo has urged Ghanaians trained in oil and gas to transfer knowledge to the people to help cut down the cost involved in hiring expatriates to build capacity in that sector.

He also charged them to be role models of excellence and demonstrate to the world that their skills were as good as those of their counterparts elsewhere.

The President was speaking when he welcomed nine lecturers from the various technical training institutions in the country who had returned home after undergoing training in Canada to the Jubilee House in Accra last Monday.

They underwent an 11-month training at the Northern Alberta Institute of Technology in Edmonton, Canada, as master instructors.

Apart from pipe-fitting, they also received advanced certificates in welding and mechanical engineering.

The beneficiaries, who comprised seven males and two females, began the training in January this year as part of the government’s accelerated oil and gas capacity (AOGC) programme.

President Akufo-Addo said the government was making huge investments in the oil and gas sector, including the hiring of expatriates.

“As pioneers, you have the responsibility of ensuring that those coming after you, those you will be training, will recognise the value of what you have and the role they can play in the development of the country,” he added.

He gave an assurance that the government would continue to offer support to the industry and expressed the hope that the nation would reap maximum value from their training.

The Chief Executive of the Petroleum Commission, Egbert Faibille, said there had not been any technical institution that trained and certified pipe fitters in the country since independence.

He said anytime there was the need to work on pipe-fitting in the upstream oil industry, they had to bring in expatriates, at great cost to the nation.

The objective of the sponsored training was, therefore, to ensure that those trained in Canada would rejoin their respective faculties and offer pipe-fitting as a stand-alone discipline, the CEO said.

He said the commission had obtained a $5m grant from Aker Energy to build a world-class welding and pipe-fitting centre at the TaTU, which might be replicated in other regions for the training of the youth, in line with international standards.

Mr Faibille further said the commission had sponsored the training of 150 people who, on completion of the training, would obtain the City and Guilds International Vocational Certification Level Three in instrumentation, mechanical and electrical engineering.