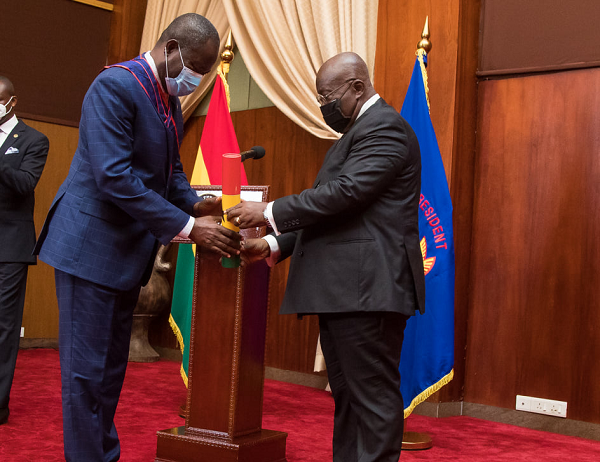 President Nana Addo Dankwa Akufo-Addo has conferred the national award of Companion of the Order of Volta, Honorary Division, on the Chief Executive Officer (CEO) of the Ghana Cocoa Board (COCOBOD), Mr Joseph Boahen Aidoo.

The national honours were conferred on the two for leading the joint Ghanaian-Ivorian effort to secure a new trading mechanism which allows for a new cost item of $400 per tonne to be paid as Living Income Differential (LID) for cocoa sold by the two countries.

“We are thus gathered here to confer the state honour of Ghana, the Companion of the Order of Volta, on these two deserving gentlemen for their excellent contributions to the development of the cocoa industry and improvement in the circumstances of cocoa farmers in their respective countries,” President Akufo-Addo added.

A couple of months ago, the President of Cote d’Ivoire conferred similar awards on both gentlemen.

Explaining the awards, the President said Ghana and Cote d’Ivoire produced 65 per cent of the world's cocoa, and so if they worked together and coordinated their policies, they could protect their farmers better and guarantee them a better life.

He said the two Presidents agreed and signed the agreement for a strategic partnership which intended to merge the cocoa production and marketing policies of the two countries.

It also ensured that they did not continue to be victims or pawns of a global cocoa industry that is dependent on the toil and effort of farmers.

President Akufo-Addo said price volatility on the international cocoa market was the biggest threat to the sector, especially as the fortunes of farmers were tied to the market.

Therefore, one of the objectives of the strategic partnership agreement was to address the issue of fluctuating cocoa prices on the world market.

He said the two awardees, after consultations, had a two-day stakeholder engagement on farmer incomes in June 2019, involving trade houses, cocoa purchasing companies, chocolatiers and other players in the global cocoa and chocolate industry.

He said an agreement in principle for floor price mechanism for the sale of cocoa produced in Ghana and Cote d’Ivoire was first reached at the end of the engagements.

In Abidjan in July 2019, a decision was reached to implement a new trading mechanism which allowed the $400 LID.

The LID, President Akufo-Addo said, was a historic achievement that would provide farmers with rewarding remunerations and also safeguard their future welfare by creating a lasting buffer for them against the shocks associated with variations in the world market price of cocoa.

Mr Aidoo said he was humbled to be honoured with such a high national award in his lifetime.

He credited President Akufo-Addo and his Ivorian counterpart, Alassane Dramane Ouattara, for initiating the processes which ultimately led to the achievement of a new trading mechanism for cocoa from the two countries.

For his part, Mr Yves expressed how honoured he was for the award and commended President Akufo-Addo for the recognition, adding that it was not just for him but all those who supported the effort to achieve the LID and, indeed, the entire Ivorian nation