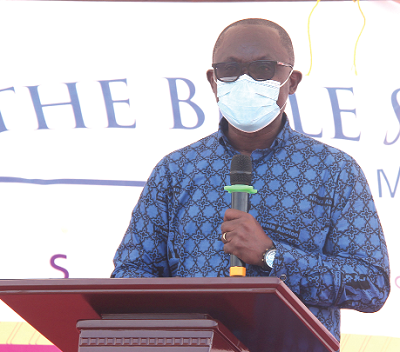 Rev. Enoch Aryee-Atta, General Secretary of the Bible Society of Ghana, making some remarks at the awareness creation programme.

Teenage pregnancies and deliveries are accompanied by more risks as compared to older women.

The risks include pre-eclampsia — a condition in pregnancy characterised by high blood pressure and fluid retention.

A nurse at the Madina Polyclinic, Ms Dora Otoo, who made this known, said adolescents’ bodies were premature to carry foetus and that most teenagers who got pregnant ended up giving birth to pre-term babies.

She said this last Friday at an event organised by the Bible Society of Ghana to create awareness and sensitise adolescents to the dangers of teenage pregnancy.

Present at the event were stakeholders, students and teachers from Jamestown, a suburb of Accra.

“Our society has always been confronted with cases of teenage pregnancies but in recent years, the rate at which adolescent girls are getting pregnant has been on the ascendancy and it has become an issue of national concern. There is, therefore, the need for all to come on board and find a lasting solution to this menace,” he said.

Rev. Aryee-Atta stated that teenage pregnancy stemmed from a lack of effective sexual education and asked for concerted efforts to curb the menace.

Other causes of teenage pregnancy, he said,  were ignorance of its negative impacts, poverty, “unscrupulous men”, lack of parental guidance and good role models.

He lamented that most pregnant teenagers dropped out of school and had their hopes and dreams shattered.

“To curb the menace of teenage pregnancy, a multi-faceted approach must be adopted. This must include organising programmes on  sexual health for both male and female teenagers, positive parental supervision and good mentoring systems.

“Let us also consider a community-based approach which utilises school sex education integrated with community groups and the church,” he suggested.

Rev. Aryee-Atta advised teenagers to be content with what their parents provided for them and not be lured with material possessions, adding that teenagers should abort thoughts of engaging in sexual activities.

For her part, a Minister in charge of the Redemption Presbyterian Church, Rev. Agnes Ariana-Ayettey, urged adolescents to be ambassadors of teenage pregnancy in their communities and schools by staying away from sex and telling their peers to do same.