Portions of Pokuase, Obetsebi-Lamptey interchange projects to be opened Nov 25 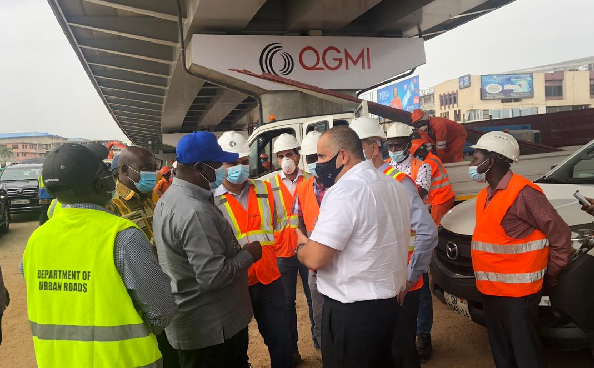 Some portions of the Obetsebi-Lamptey and the Pokuase interchange projects in Accra are to be opened to traffic next week.

The Minister of Roads and Highways, Mr. Kwesi Amoako-Atta, who disclosed this, said although both interchanges were projected to be ready for use next year, the contractors had increased the pace of work to ensure their early completion.

The minister was briefing the media during an inspection tour of the projects to observe progress of work yesterday.

He also visited the Hansonic Junction on the Odorkor-Kaneshie road, also in Accra, to inspect ongoing de-silting works there.

At the Obetsebi-Lamptey Interchange, Mr. Amoako-Atta commended the contractors and said originally the project should have been completed next year, but because of the seriousness the contractors attached to the project, they had been able to complete part of the work about five months ahead of schedule.

“This means the company is serious, and this is the type of company that we are always prepared to partner. Even without a technical eye, you can clearly see that a good work has been done, and that is what we want to promote in Ghana to get value for money,” he added.

During the tour, the Daily Graphic observed that construction works were still ongoing on parts of the projects.

At the Pokuase Interchange, the Awoshie-Kwabenya stretch had been asphalted, while some pedestrian walkways had also been completed.

Also, storm drains along both sides of the Awoshie and the Accra-Nsawam stretches had been completed.

The Chief Resident Engineer at the Obetsebi-Lamptey Interchange, Mr. Owusu Sekyere Antwi, said the only work left on the first tier was load testing to demonstrate the structure's capabilities.

After that, he said, they would add road furniture, such as steel covers and traffic domes, to provide drivers with the necessary warnings, rules, distance and directional information.

For his part, the Resident Engineer at the Pokuase Interchange, Mr. Kwabena Bempong, said the project was about 87 per cent complete.

“We have already started doing the asphalting works and the only thing that is going to delay is the top tier, which will be delivered by March next year. With the Accra-Kumasi road, we have done almost 90 per cent of that and we have also done 96 per cent of the Awoshie-Kwabenya road,” he added.

The Obetsebi-Lamptey Interchange, which is in two phases, is being constructed by M/S Queiroz Galvao-UK International.

On the other hand, the Pokuase project, which cost $84 million, is being constructed by Messrs China Zhongmei Engineering Company Limited.

It was initially a three-tier project but was later upgraded to a four-tier interchange.

The first tier links Accra to Nsawam, while the middle tier can also be used to access Awoshie, Pokuase and Nsawam. The third tier connects Awoshie to Pokuase ACP.