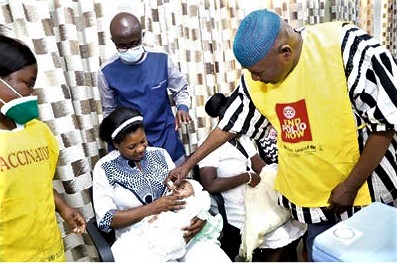 The Ghana Health Service (GHS) is set to roll out the National Immunisation Days against Polio campaign to contain the spread of the polio virus in the country.

Recent tests by the GHS have confirmed rising cases of polio in children below five years, with two children becoming paralysed.

Dubbed: “Kick polio out of Ghana: Vaccinate your child now”, the exercise is aimed at checking the spread of the virus across the country.

The exercise targets children below five years, and would be held in two-folds, first from today to Sunday, and then from October 6 to October 9, 2022.

At the launch of the campaign in Accra yesterday, a Deputy Minister of Health, Mahama Asei Seini, said the GHS had confirmed positive polio cases and a case (acute flaccid paralysis) of circulating vaccine derived polio virus type 2 (cVDPV2) from environmental sites in the Northern and Savannah regions.

Following the confirmation, further surveillance activities confirmed events in environmental samples in other regions across the country, particularly Ashanti and Greater Accra, which were linked to events within the West African sub-region.

“As a result of these current polio events, the GHS and its partners organised a systematic risk assessment, and the results showed the whole country is prone to high levels of local transmission of polio virus,” he said.

The Deputy Director-General of the GHS, Dr Anthony Adofo Ofosu, stated that since polio eradication activities began in 1996, the country had attained great strides in becoming polio-free.

These strides, he said, were attained by a collective effort by the government, parents, nurses, caregivers and the nation at large.

“However, in spite of worldwide efforts, the fight against polio is not over,” he said, adding that some countries were still faced with wild polio at endemic stages, which kept the country at risk of importing from those countries.

The Programme Manager of the Expanded Programme on Immunisation, Dr Kwame Amponsa-Achiano, said an improved version of the polio vaccine, the novel oral polio virus type 2 (nOPV2), would be used to build stronger immunity.

He added that all children, irrespective of whether they had previously been vaccinated, were to partake in the exercise and cautioned that all children below 15 years who experienced weakness in the limbs should report to the nearest health facility as it could be polio.

The Paramount Queenmother of the Osu Doku Traditional Area, Nana Amponsah Dokua III, who chaired the event, said polio posed threats to the lives of family and friends, and called on traditional leaders to create awareness of the virus and the vaccination in their communities.