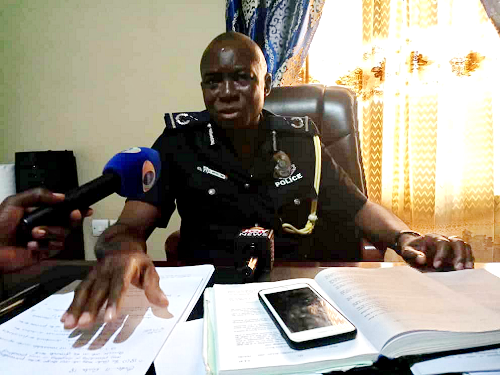 A policeman who allegedly aided a suspected thief currently standing trial for stealing and possessing fire arms to illegally acquire a gun license has been arrested.

Inspector Felix Gbekle, who is the station officer of the Nalerigu Police Station has since been interdicted by the North East Regional Police Command.

He is said to have facilitated the registration process of a firearm which was an exhibit in police custody for the suspected thief whose case is still on trial at the Nalerigu District Court.

He said the police inspector has been charged with abetment of crime and would be prosecuted.

He explained that one Adam Musah was arrested for allegedly stealing a motorbike in August this year.

Upon a search in his house, the police found an unregistered pump action gun.

Musah was then charged with possession of an unregistered firearm and stealing, and was subsequently arraigned before the Nalerigu District Court.

During trial, Musah produced a license for the gun, but the police prosecutors became suspicious and prayed the court for more time to enable them examine the license and conduct further investigations.

DCOP Tabi added that it was during the investigations that the prosecutors discovered that Inspector Gbekle facilitated the gun license process for Adam Musah.

He explained further that Inspector  Gbekle allegedly  took pictures of the gun and sent it to his colleague at the Formed Police Unit (FPU) of the Tesano Divisional Police Command in Accra where he worked previously to facilitate the process.

When this act was detected and he was further interrogated, Inspector Felix Gbekle admitted doing that.

He was subsequently interdicted and arrested under regulation 105 of the Police Service Regulations, 2012 C.I. 76, while a criminal charge has been leveled against him.

The police commander assured the public that the accused Inspector Felix Gbekle would not be shielded, but would be prosecuted to serve as deterrent to others and restore public confidence in the police.