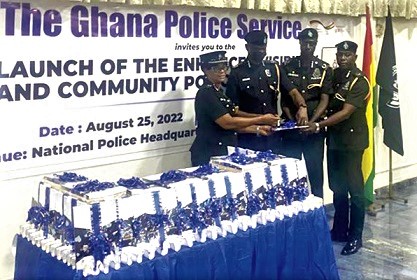 COP Paul Manly Awini (2nd from left), Director-General of the National Patrol Department of the Ghana Police Service, being assisted by other senior police officers to launch the document
30.5k Shares

The Ghana Police Service has launched a community-based policing strategy that will foster collaboration between personnel of the service and local authorities to enforce law, order and security in metropolises, municipalities and districts across the country.

Such collaboration will also enable the public to identify, prioritise and address pertinent issues of crime in their various communities.

The police will also intensify day and night patrols within small defined areas in various police districts and establish good relations, rapport and trust with residents of those areas.

Also, district police commanders, who will be the main drivers of the strategy, will be required to develop security and crime prevention plans with stakeholders in their respective jurisdictions.

The Director-General of the National Patrol Department of the Ghana Police Service, Commissioner of Police (COP) Paul Manly Awini, who launched the strategy document in Accra yesterday, said the plan would not only increase police visibility in communities but also ensure that personnel worked more in collaboration with opinion leaders and state agencies to sustain law and order in those areas.

He said over the past decade, the community policing concept had made a significant contribution to the fight against crime in the country, hence the need to further enrich the concept and make it more effective.

“It has become necessary to increase police visibility in zones where the fear of crime still exists and where crime and anti-social behaviour affect the daily lives of members of the public,” COP Awini said.

The strategy, he said, integrated key elements of a community crime fighting and removal of fear of crime initiative, adding: “The launch of this strategy comes at a time when the Police Administration is making efforts to transform the law enforcement agency and make communities safer for the people.”

It would also enhance crime prevention campaigns, in partnership with neighbourhood watch committees, residents associations, community protection assistants and other stakeholders, he said.

The D-G commended consultants and the technical working group for their efforts at producing the final document for the implementation of the strategy.

He also expressed gratitude to the German Development Agency (GIZ) for providing support and expertise for the Police Service for the development of the strategy.

COP Awini urged the public to support the police in making the strategy effective, saying: “Security is a shared responsibility between the police and members of the public.”