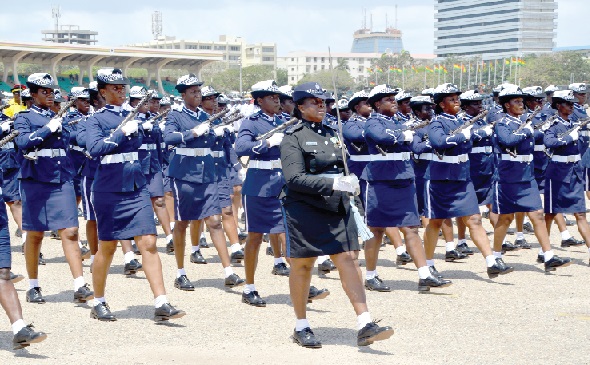 The Minister for the Interior, Ambrose Dery, has called on female police officers to stem the adverse image against the service in order to increase public confidence and trust in the police.

At the launch of the 70th anniversary of the Police Ladies Association (POLAS) in Accra, Mr Dery said the support of female police officers was crucial in transforming the Police Service.

The minister made the call in a speech read on his behalf.

He explained that the Police Administration was pursuing a transformational agenda which sought to, among others, position the Ghana Police Service as a world class police service, citing the support of POLAS as crucial.

“Women are very skillful in intelligence gathering and management, and are perceived by communities as being more honest and compassionate,” the minister said.

He, therefore, urged members of POLAS to build their capacities, particularly on emerging crime trends, to keep up with everyday happenings in respect of security matters.

The President of POLAS, Commissioner of Police (COP) Maame Yaa Tiwaa Addo-Danquah, said female policing had come a long way since women got the chance to join the force from December 6, 1952.

She explained that even after women were allowed into the service, they faced issues with marriage and childbirth, with most of them being forced to resign when they got pregnant.

She indicated that it was because of such challenges that POLAS was formed in January, 1989 to promote the welfare of police women to give them a voice in the service.

COP Addo-Danquah, however, urged all policewomen to contribute to the service to restore public trust, while urging them to move from their comfort zone and take up challenging ventures to unearth their hidden potentials.

In a speech read on his behalf, the Inspector General of Police, Dr George Akuffo Dampare, congratulated policewomen on the occasion, and urged them to aim higher to achieve bigger laurels for themselves.

He urged them not to rest on their oars but to continue to strive to give of their best towards the peace and security of the country.

He said the period when women were disadvantaged at work was a thing of the past, stressing that the 1992 Constitution had provided special rights for women.

Activities lined up for the monthlong celebration include cash donations to institutions, school education campaigns, games with sister security agencies and a climax of an all-female parade and police band display.