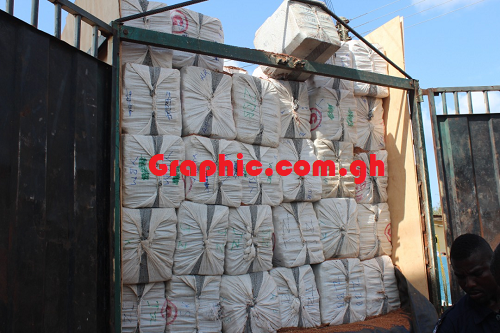 The police in the Bono Region have arrested a 27 year-old driver, Ayuba Ali and his 20 year-old mate, Ametus Sori for allegedly transporting 8,460 compressed bales of dried leaves suspected to be indian hemp valued at GH¢1, 269, 000.

The substance were packed in 180 sacks each of which contained 47 compressed slabs of the suspected cannabis.

The driver and the mate onboard a Rhino Cargo Truck with registration number GR 2474-16 were transporting the substance from Nsawkaw, the Tain District capital.

The two were busted at a section of the road between Menji in the Tain District and Banda in the Banda District while they were on their way to Burkina Faso at about 1:00am.

In order to outwit the police at the various check points, the suspects mixed the substance with other items such as boxes of weedicide, lumber, plywood and saw dust to suggest that they were transporting lumber and farm inputs.

The suspects were said to have told the police they hailed from Kunnyukuon near Babile in the Upper West Region and were contracted for at a sum of GH¢7, 000 to transport the substance to Hamile and subsequently to Burkina Faso.

However, luck eluded them when they were arrested by the officials of the Drug Law Enforcement Unit of the Ghana Police Service (GPS).

The Bono Regional Crime Officer, Superintendent Kwaku Duah, told the media that personnel of the Drug Law Enforcement Unit had a tip-off that the impounded truck had loaded bales of dried leaves suspected to be cannabis at Nsawkaw and was heading towards Banda en route Hamile and to Burkina Faso.

According to him, the unit led by the Detective Inspector Adams Yahaya swiftly traced the truck and intercepted it on the Menji-Banda road near the Bui Dam.

Supt Duah said the police inspected the load and found out that it was carrying the substance, compressed in black and brown sellotape and kept in white plastic bags.

He said upon interrogation, Ali admitted he was transporting the bales of the suspected cannabis, alleging that he was contracted by a certain man at Nsawkaw, whose name he did not know but could identified him when seen, to transport the substance.

Supt Duah said the police has begun investigation for the arrest of those who contracted the suspects to transport the substance to Hamile, explaining that since the establishment of the unit in the region last year, this was the biggest substance they have intercepted.

“Efforts are been made to arrest those who contracted them, meanwhile the driver and the mate are been process for court. We are charging them for unlawful possession of narcotics drugs", he stated.

Supt Duah said the police acted upon a tip-off and appealed to the public to assist the police with information that could lead to the arrest of those engaged in narcotic drugs.

“It will interest you to know that almost all the cases we handle here have a link with drugs addiction, so dealing with drugs must be the concern to all”, he explained.