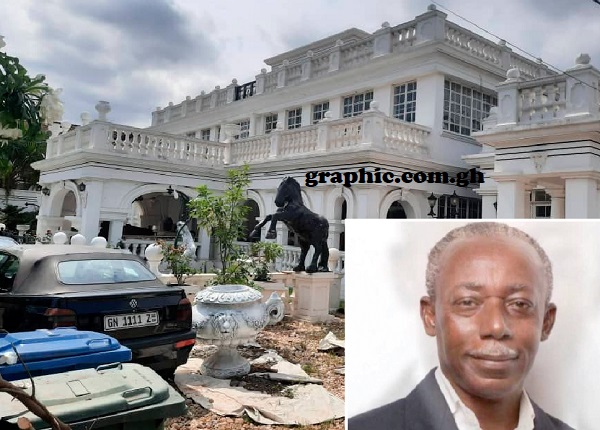 The East Legon House where Prof. Benneh (inset) was murdered.

The police have picked up four persons to assist in the investigation into last Saturday’s gruesome murder of Professor Emmanuel Yaw Benneh, a Senior Lecturer of the University of Ghana Law Faculty.

The body of the law lecturer, younger brother of a former Vice-Chancellor of the University of Ghana, Prof. George Benneh, was discovered in his residence on Saturday morning lying in a pool of blood, with his hands tied behind him and his body bearing cuts all over.

The Public Relation Officer (PRO) of the Accra Regional Police Command, Deputy Superintendent of Police (DSP) Afia Tenge, said the East Legon police received a report at about 7 a.m. last Saturday that Prof. Benneh had been found dead in his home at Adjirigano in a pool of blood.

She said the police, along with the Crime Scene Investigations team from the CID headquarters, proceeded to the house and found him lying dead with some cuts on his body.

“Currently a team of investigators, including the crime scene management team from the CID, have begun investigations and are undertaking a thorough crime scene reconstruction analysis to help the police make headway into the unfortunate incident,” she stated.

She further added that the police would readily inform the public of any development which would not jeopardise the investigations.

DSP Tenge said the body of the deceased had been deposited at the Police Hospital morgue awaiting autopsy.

At his Adjirigano residence, a handful of close relatives and friends gathered in sorrow yesterday afternoon, mourning the late law professor.

The entire gathering was in a state of shock, and individually, they spoke to the Daily Graphic of their fond memories of the man who was acclaimed to be an affable academic.

The sister of the late professor, a former Director of Passport and former Ghana High Commissioner to Lusaka (Zambia), Ms Elizabeth Afia Benneh, who resides close to Prof. Benneh’s residence, was solemnly receiving other relatives when the Daily Graphic got to the house.

She struggled to confirm to the paper news of his brother’s murder, and insisted that whoever did the dastardly act may have mistaken him for another person.

"Yes, they have killed him, but I believe it was a mistaken identity because he was such a cool and calm person," she said.

A nephew of the late law professor and son of Prof. George Benneh, Mr Kwadwo Benneh, also told the Daily Graphic that the last time any relative got in touch with his late uncle was last Thursday evening when he spoke to his sister next door.

Mr Benneh said the passing of his uncle was a big loss not just to the family but "indeed, students of law, the legal practice and the nation as a whole".

His colleague lecturer at the University of Ghana Law Faculty, Dr Poku Adusei, took to his Facebook wall to share the bad news.

”Folks, I had wanted not to be the breaker of such ominous news, but the calls are incessant: The world is damned evil; Prof. Yaw Benneh of Legon Law has been 'murdered' in JB-style in his Adjirigano mansion.

“It appears to be an act perpetuated about three days ago, but it was just discovered this morning,” Dr Adusei wrote.

One of his students now at the bar, Mr Sylvanus Nana Kumi, said: “I'm distraught. A peerless brain is gone. Dispatched in a very crude way: cold-blooded murder. Gratuitous oddity. Wofa Yaw Benneh, my lecturer at both LLB and Master's levels. May his soul rest in peace.”

He described him as a walking encyclopedia of Public International Law, saying “with no book in hand, he could teach every topic under public international law without fumbling.

“He would answer every question with exactitude and could quote copiously from various international law scholars without referring to their books,” Mr Kumi, who practices at ‘Enso Nyame Ye’ Chambers in Sunyani, stated.

He earned his LL.B with Second Class Upper from the University of Ghana and had an enormous consulting experience, and has published extensively.

Prof. Benneh lived alone in Adjirigano, was not married but had a son who lives abroad.