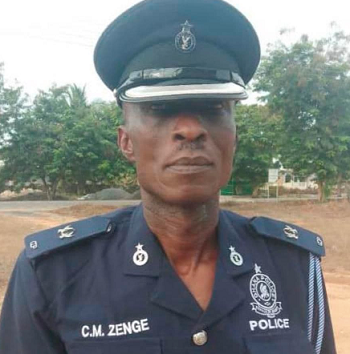 The Ghana Police Service has commenced investigations into events leading to the death of the Half Assini District Commander of Police, Supt Cyprian Zeno Zenge, at the porch of his bungalow in the early hours of last Saturday.

Preliminary investigations by the Western Regional Crime Scene Team allege suicide, indicating that the officer used his side pistol to kill himself.

The police found the gun reportedly used by the late officer, as well as a purported suicide note he left behind.

They did not, however, disclose the content of the note.

“The Regional Crime Scene Team has already visited the scene where he was found sitting in a blue chair, with a gunshot wound on his forehead, his pistol beside him on the floor and one spent ammunition under the chair,” it said.

It added that “although preliminary investigations point to suicide, investigations are still opened to unravel the true circumstances leading to the death of the officer”.

It said the officer’s death had since been communicated to his family, while the body had been moved to the Effia-Nkwanta Hospital in Takoradi for autopsy.

The statement appealed to all to be circumspect in their reportage or commentary on the incident in order not to offend the sensibilities of the grieving family.

The news of the officer’s death came as a shock to community members, who described him as a simple man who, despite the availability of his official vehicle, usually walked home after work, smiling and greeting people on his way.

Some also claimed they had seen the officer at the Half Assini transport terminal in the evening of last Friday, on his way to Takoradi, but he (Sup. Zenge) had to return home because the Takoradi-bound vehicle did not get enough passengers.

They said they were shocked to hear of his death the next day.

The 57-year-old Supt Zenge was a native of Nandom in the Upper West Region.

He was posted to the Jomoro municipality as the District Police Commander in 2017.

He had earlier served as the Public Relations Officer (PRO) for the Greater Accra Regional Police Command.