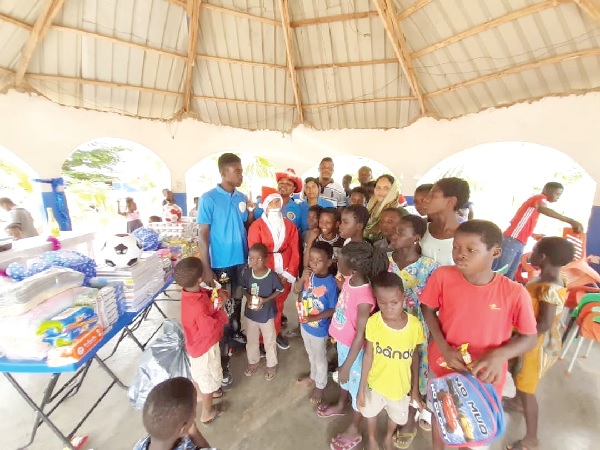 Some of the children with officials of Eye of the Lord Day Care Centre, after the presentation Follow @Graphicgh

St Joseph Plastic Company Limited, a plastic manufacturing and recycling company, has presented assorted items to the Eye of the Lord Day Care Centre, an orphanage at Nsawam-Adoagyiri in the Eastern Region.

The donation was to offer the children the opportunity to celebrate Christmas at the centre.

The donation was made during this year’s Christmas party organised by the company for the children, where they were treated to a sumptuous hot meal with biscuits and drinks.

Purpose of donation
The team from St Joseph Plastic was led by Ms Nancy Beatrice Owusu, the company’s secretary.

It was party time for the children of the Eye of the Lord Day Care Centre on Christmas Day.

“It is part of our efforts to support the vulnerable within these deprived areas. And we could not have done it better than Christmas by way of showing much love to these children.

“For us, the vulnerable in society should be catered for and this is the crucial time to give them the needed care and support,” Mr Malik added.

He said the company would continue to embark on similar projects in the course of the year to put smiles on the faces of the underprivileged in society.

Appeal
The owner of the centre, Mr Samuel Darko Kwapong, and his wife Ms Mary Kwesebea, received the items.

Mr Kwapong expressed appreciation to the company for the gesture, and appealed to other corporate entities and individuals to also come to the aid of the centre since caring for children who had been neglected by their families was a Herculean task.

Some members of St Joseph Plastic Company with the items.

He also appealed to the Department of Social Welfare to grant the centre the needed certification to be able to operate effectively, noting that the lack of same was making its work a bit difficult.

“I have been caring for the mentally challenged, abandoned children, among others, but Social Welfare has not granted me the permit, and nobody knows why they are doing that even though I have met all the requirements,” he said.