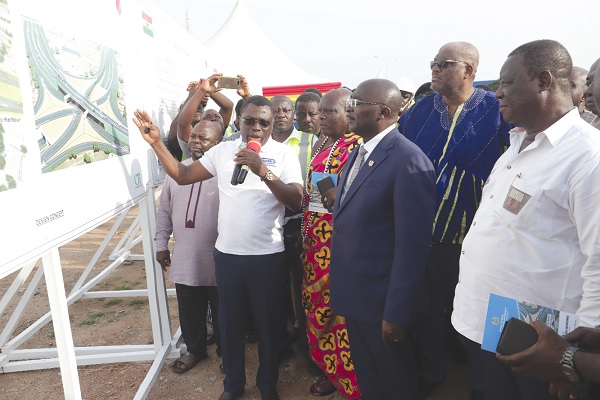 The Vice-President, Dr Mahamudu Bawumia, has cut the sod for the construction of the second phase of the Tema Motorway Interchange project.

The project will comprise the construction of a third-tier flyover of approximately 1.8 kilometres, stretching from the Total Filling Station at Tema Community 9 towards the Ashaiman Timber Market on the Tema-Akosombo road.

The project, being funded with a Japanese grant of about $27 million, is expected to provide an anchor for the continuous expansion of the 64-kilometre Tema-Akosombo stretch.

Works on the project are expected to be completed in December 2024.

At the sod-cutting ceremony at the Tema Motorway Roundabout yesterday, Vice-President Bawumia indicated that the new phase would provide a third tier on the existing two-tier interchange at the main roundabout intersection.

Improvement works, he said, would also involve the construction of a viaduct (a type of long bridge usually supported by arches), thereby allowing for a grade separation to improve traffic flow around the Motorway Roundabout.

Giving an overview of the country's most effective international trade link road, the Tema-Accra Motorway, Dr Bawumia said efforts were being made to improve the quality of the road infrastructure from its present state into a 10-lane stretch (five on each side), for which financing arrangements were being finalised.

"Phase one of the project will be between the Tema Motorway Roundabout and the Tetteh-Quarshie Interchange and will include a four lane expressway with concrete pavements, as well as three asphaltic service roads on either side,” he said.

While commending the government and the people of Japan, through the Japanese International Cooperation Agency (JICA), for providing the grant funding for the entire work, he challenged the Ministry of Roads and Highways and the implementing partners to ensure that adequate measures were put in place during construction to reduce the inconvenience that the project would bring to residents and the travelling public.

The Minister of Roads and Highways, Kwasi Amoako-Attah, who gave a historical background of the project, said the Tema Motorway Roundabout used to be a five-legged roundabout that was heavily congested.

He said the sod was cut by the Vice-President for phase one on July 27, 2018 and works were completed and inaugurated by President Nana Addo Dankwa Akufo-Addo on July 5, 2020.

The minister added that although the second phase of the project was independent of the first, both phases complemented each other.

He appealed to residents and motorists to bear with the contractor during the construction period, adding that the Ministry of Roads and Highways would ensure that the works were carried out to specifications and standards.

"This is necessary to give the nation value for money," Mr Amoako-Attah said.

The Japanese Ambassador to Ghana, Hisanobu Mochizuki, in his remarks, said Japanese support for phase two of the project was a testimony of the deep and longstanding friendship between the two countries, as well as the continued commitment to Ghana’s road infrastructure development.

He said the government of Japan was aware of the importance of investment in quality road infrastructure as a major driving force for economic development.

In that regard, the Tema Motorway Roundabout could play a significant role as a regional transport hub by connecting Ghana’s major harbour to neighbouring countries, Mr Mochizuki said.

“We remain hopeful that the completion of the project will open up the Tema Harbour to other parts of the country and expand economic opportunities for Ghanaians," he added.

The Country Director of the JICA Ghana Office, Araki Yasumichi, for his part, pointed out that the project would continue to demonstrate what he termed “quality infrastructure", a Japanese concept of promoting high technology and very efficient life-cycle cost.

He commended the stakeholders and especially the Minister of Roads and Highways for his keen interest in the project and pledged that JICA would continue to work in close collaboration with the ministry and its agencies to ensure the project was successfully completed.