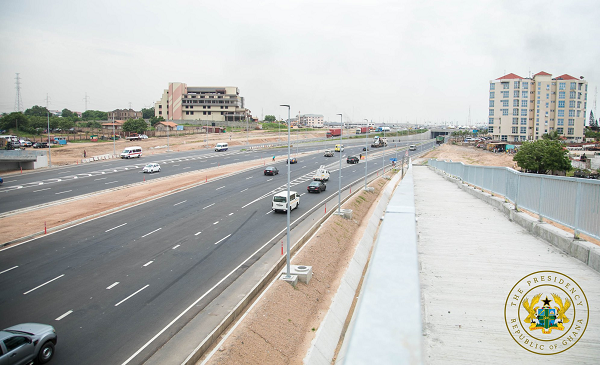 President Nana Addo Dankwa Akufo-Addo has inaugurated the first phase of the newly constructed Tema Motorway Interchange, with an assurance that the second phase of the project will commence by the last quarter of the year.

The project, which lasted for 28 months, was financed with a grant of $56 million (six billion yen) secured from the Japanese government and is to be undertaken by Messrs Shimizu Dai-Nippon, a Japanese construction firm.

It comprises a two-tier intersection, a tunnel in the east-west direction, four kilometres of improved roads, four pedestrian bridges, one at each approach to the intersection, and the construction of several drainage structures.

The four-kilometre stretch project, which commenced on February 18, 2018, saw all four legs stretching from the roundabout towards the Tema Harbour Road being extended by 1.9 kilometres, while the Roundabout-Tema-Aflao stretch was also extended by 2.1 kilometres.

It forms part of the government’s international corridor road improvement project aimed at ensuring efficiency in trade within the West African sub-region.

President Akufo-Addo, addressing the inauguration ceremony at the project site in Tema yesterday, said the project would bring to an end the inconvenience of unbearable traffic at the then Rotary Roundabout.

“For many years, residents living in and around the Tema metropolis and motorists plying this route have had to endure the inconvenience of unbearable traffic at the main Rotary Roundabout and a poor road network.

“Today, we are witnessing an end to this unacceptable situation with the inauguration of the newly constructed Tema Interchange, which is part of the Ghana International Corridors Project,” he said.

Explaining further, the President said phase two of the Tema Interchange project was scheduled to commence in the last quarter of the year, saying it would see the transformation of the parallel two-tier interchange into a three-tier one to hasten further the turnaround time at the intersection.

Other projects to ensure maximum efficiency of transportation in the enclave, President Akufo-Addo said, included the construction of the 64.4-kilometre Ashaiman Roundabout-Akosombo Junction road at a cost of €256 million from the KFW, the Germany development bank.

That, he said, would see the current single carriageway of the Akosombo road expanded into a multi-lane dual carriageway, service roads, the construction of interchanges at the Ashaiman Roundabout and the Asutsuare Junction in the Shai Osudoku District in the Greater Accra Region.

He added that the dualisation of the 17-kilometre stretch of the Tema-Aflao road project, which was also expected to cost $105 million, would tie the trans-African highway project from Lagos to Abidjan, while the current two-lane dual carriageway would be expanded into a three-lane carriageway per each direction.

He also said the valuation of the Accra-Tema Motorway expansion into a three-lane dual carriageway and service roads under a public-private partnership (PPP) arrangement had been completed and “we are awaiting approval from the PPP Committee of the Ministry of Finance to engage the contractor”.

Touting the immense economic benefits of such trunk roads being undertaken by the Ghana Highway Authority (GHA), the Department of Urban Roads and the Department of Feeder Roads across the country, President Akufo-Addo said the government was committed to the successful completion of all the projects and urged the Ministry of Roads and Highways to see to their expeditious execution.

This year being the year of roads, he expressed delight at the appreciable improvement in the trunk road network in the country, as more sections of roads were being upgraded from gravel surfaces to bitumen or asphalt concrete surface.

He said it was not lost on anyone that the free flow of traffic in the cities and urban areas, as well as safety on roads in the country, was critical to the development of the country and enhancing the growth of key sectors of the economy.

“That is why the completion of phase one of the Tema Interchange project is such a welcome development. We made a pledge to the Ghanaian people to expand and improve the road network, while closing the missing links in the networks.

“We had to make this pledge because we knew that the so-called unprecedented infrastructure development of the Mahama administration was a fantasy existing in the Green Book and not on the ground,” he said.

The President cautioned motorists to be aware of their responsibility in the use of the country’s roads and noted that the severity and frequency of accidents on the country’s highways, due to speeding and indiscipline, were a great reproach to the entire country.

“Motorists need to be extra careful and disciplined on the highway and resist the temptation of speeding. Better roads should be a catalyst for national development and not instruments of death and pain. It is time we brought road accidents in our country under control,” he said.

While emphasising the relationship between Ghana and Japan, President Akufo-Addo paid tribute to all who contributed to the successful completion of the project, and particularly mentioned the Emperor of Japan, Emperor Naruhito, and the Japanese Prime Minister, Shinzo Abe, both of whom he described as friends of Ghana, and the Japanese people for providing the facility.

The Minister of Roads and Highways, Mr Kwesi Amoako-Atta, said traffic congestion at the roundabout had been a major challenge for many years and impeded the smooth and safe movement of people and goods.

He, therefore, urged the GHA to ensure the completion of all ancillary works to ensure the successful take-off of the second phase

For his part, the Japanese Ambassador to Ghana, Mr Tsutomu Himeno, said he was happy and proud to be part of the ceremony to showcase Japan-Ghana friendship and partnership.

He said Japan would continue to foster partnerships with Ghana, particularly in the areas of road infrastructure and agricultural development.

“We are a long-standing supporter of Ghana’s socio-economic development and the Noguchi Memorial Institute remains one of our valuable contributions to Ghana,” he said.

Mr Himeno commended President Akufo-Addo for building a strong relationship with the people and the Japanese government and for creating opportunities to welcome Japanese businesses into Ghana.