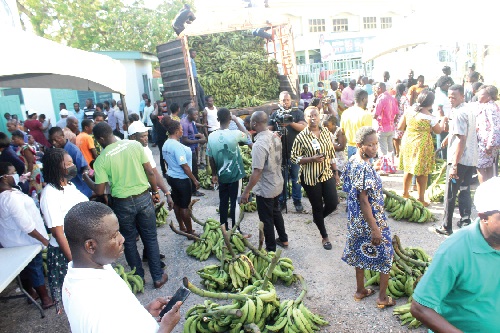 The PFJ Market at the premises of the Ministry of Food and Agriculture
30.5k Shares

The Ministry of Food and Agriculture has come under fire in recent times for the high prices of food items, since it has always touted its achievement in food sufficiency under the flagship, Planting for Food and Jobs programme.

To respond to the concerns raised, officials of the ministry, led by the sector minister, Dr Owusu Afriyie Akoto, undertook a fact-finding tour of some of the food producing areas to ascertain the availability of food items in the country.

The team visited Bono, Bono East, Ahafo, Ashanti and Eastern regions and on return, the minister said the facts on the ground indicated that even though the prices of food items were high at the urban centres, they were relatively cheaper in the producing areas.

The report submitted by the ministry led to a formal engagement between the government and stakeholders in the agriculture value-chain such as the market queens, the traders and the transport operators under the chairmanship of the Senior Minister, Yaw Osafo-Maafo, to find a solution to the high cost of food items in the urban centres.

The fallout of the discussion resulted in the decision of the ministry to move to the farm gates, in collaboration with the private sector to cart food to Accra to sell to civil servants and other citizens.

Known as the PFJ Market, which started on the premises of the MoFA, the high patronage and the scramble for the items at the ministry, led to the establishment of the satellite markets.

Currently, the market has been replicated in Kumasi, the Ashanti Regional capital, with the main market at the Jubilee Park and two other centres at the Suame Roundabout and Bantama Market.

Initially, the market was targeting civil servants but since the introduction of the market on November 11, 2022, the patronage moved beyond workers of the various ministries, staff of businesses within the ministries enclave to include other citizens, who moved from parts of Accra to take advantage of the items which were sold at relatively cheaper prices, compared to what was sold in the open market.

Three main brands of rice were available for buyers at the PFJ market, namely "Royal Farmer" by Avnash, "Mama Gold" by Olam Ghana Limited and "Local One" by MK Flow Local Organic Rice.

The five kilogrammes bag of local rice is being sold for GH¢70 compared to a similar quantity which is selling at GH¢90 and above in the open market, depending on the brand.

Other food items being sold in these markets are plantain and tubers of yam at relatively cheaper prices as a bunch of plantain goes for between GH¢10 and GH¢15, while in the open market similar bunches go for between GH¢25 and GH¢30 respectively. 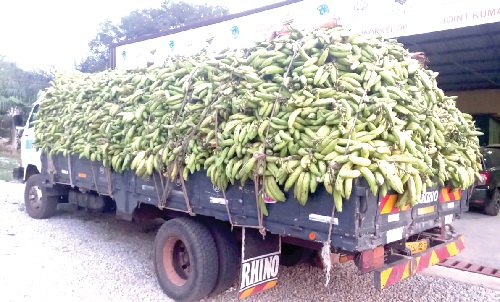 Surely, the MoFA is justified when it complains that market women and food sellers seem to be taking undue advantage of the high cost of living and are ripping off consumers with the false claim that the high transport fares are to blame.

After all, the food items currently being sold at the PFJ markets are also transported from the producing areas, taking into account the fares and other freight charges and yet the prices are reasonably cheap.

For Dr Akoto, the PFJ Market initiative vindicated the avowed position of the ministry that there was enough food at an affordable price but that some market women or middlemen are taking undue advantage to make supernormal gains.

He added that the essence of the market was to show that food items brought to Accra by the traders could be sold at a far reduced price and still break even.

The minister gave an assurance that not a cedi of the tax payer's money was going into the organisation of the markets but that, “the ministry is only playing a facilitation role through its extension officers, who are on the ground and know where the food items are produced to mobilise the farmers to rally around for easy coordination.”

The ministry’s mandate, clearly is to implement right policies and create favourable conditions to ensure food sufficiency, availability and security but does not have the capacity to mobilise funds and trucks every day or week to cart food from the farm gates to sell to workers.

Dr Akoto explained that what the ministry was doing was enabling the private sector to support government to ease the hardship people were going through because of the high cost of food items, especially in the urban areas in the country.

The question many people are asking has been: How sustainable is the PFJ Market?

It is heartwarming that the private sector is effectively partnering the ministry, but the temptation to join their colleague at the open market to make the supernormal prices can be very tempting.

It is important that the government, through the ministry, offers the private companies and individuals some incentives such as subsidies on farming implements, fertiliser, improved seeds and free technical advice for their commitment to the cause of the ordinary Ghanaian.

It is expected that these PFJ Markets will be extended to cover the whole country and with such a competition, the market traders would be forced to reduce the prices of their food items to realistic prices which will be at par with the prices at these satellite markets.