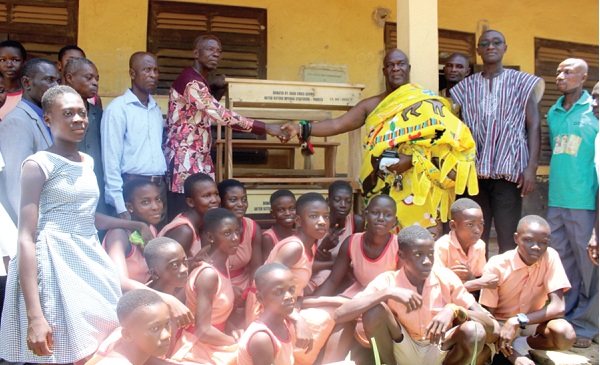 The 50 dual desks donated would address the challenge of overcrowding in classrooms which pupils in the school had to contend with.

Nana Addo donated the furniture to the school recently in response to an appeal from the administration and Parent-Teacher Association (PTA) of the school earlier this year.

The Gyasehene, in an interview with the Daily Graphic, lamented the ordeal of the school; adding that it was a sad situation to have more than the required number of pupils sitting at a desk.

"It is not gratifying to have more than two pupils on a desk. It compromises the comfortability of the pupils and restricts movement of teachers in class. In this 21st century we need to do away with these challenges in schools. As a chief, I am playing my part; that is why I donated these desks to address some of these challenges.”

He said the community had grown over the years and produced a lot of cocoa; hence, it would be ideal to also have a health facility and a senior high school, at least to give residents health care and make them recognisable.

The Headteacher of Pankese D/A JHS, Peter Kwaku Ofori, in an interview with the Daily Graphic, said the inadequate desks had made overcrowding in the classrooms a common practice.

He said "three or four pupils sit on each desk meant for at most two pupils even during examination, in order to accommodate students in the classroom."

This, he added, made fairness during examination very difficult to observe, while the comfort of students in the classroom during lesson hours was impossible.

Currently, he said the school had a population of 150 pupils with less than a 100 comfortable desks.

Mr Ofori, expressed gratitude to Nana Addo for his donation and described it as timely intervention that would beef up teaching and learning, as well as address to some extent truancy among pupils.

"We express a great deal of gratitude to Nana Gyasehene for this donation. It cannot come at a better time than this; it is a timely intervention that will address many challenges we face as a school, including truancy and overcrowding in the classroom.”

“Comfortability of pupils in class is very key for the enhancement of teaching and learning; with these desks we have answers to some of the common problems we currently have," he said.

He also appealed to Nana Addo to help in the renovation of the block of classrooms made of mud and rusty roofs, which is usually deserted during downpour, to encourage effective teaching and learning, as well as repair the school's damaged borehole.

A JHS 3 pupil, Samuella Opokua Gyekye, 12, told the Daily Graphic that aside from the inadequate chairs which had adverse impact on class attendance, the pupils also battled with residents who had made their classrooms places of convenience, as some of the classrooms had no doors.